Specifically, biofilms form when groups of microorganisms stick to a surface by secreting a glue-like substance. Biofilms may form on almost any material (natural and synthetic), including plastic, skin tissue, wood, and metal. While biofilms may be comprised of a single bacterial species, it is more common to find a mixture of various bacterial species alongside other microorganisms such as fungi and yeast.

Biofilms create a matrix of EPS (extracellular polymeric substance) that provides additional coating and protection for the bacteria inside. The proximity of the microorganisms enables various processes, such as distributing metabolic products and removing toxic end products. As a result, biofilms possess complex structures that are highly resistant to antibiotic treatment compared to planktonic (free-floating) bacteria.

1. Planktonic bacteria attach themselves to a surface. At this stage, the attachment is reversible and easily eliminated with simple antibiotic

2. Gradually, the adhered bacteria form a monolayer and the initial stages of the EPS matrix, becoming irreversibly attached.

3. The bacteria matures and grows exponentially through the formation of multiple layers, resulting in the spawning of a microcolony.

4. Colonies form “mushrooms” of polysaccharides, and eventually, some of the planktonic bacteria may disperse and spread to other surfaces (liberation of cell clusters). This may involve the separation of a clump of cells or individual cells through a process known asseeding dispersal.

These colonies may exist in various environmental settings, ranging from inside the mouth (referred to as plaque in dentistry) to contaminated water supplies and infectious surfaces in clinical settings. There are various methods and products that eliminate biofilms, but they can grow exponentially and proliferate, spreading infections in large numbers when left untreated.

Some antibacterial products such as mouthwash and disinfectants may undergo vigorous testing on harmful planktonic bacteria during research and development. However, these products may prove ineffective with real-world applications, where bacterial pathogens are more likely to colonize and exist as part of a highly resistant biofilm.

Biofilm may cause considerable damage in pharmaceutical water operations, avoiding detection until the colony has developed into a substantial size. Such scenarios are usually only detected with point-of-use samples, where there is a need to maintain consistent monitoring and control measures to respond to and limit biofilm growth.

Water operations usually provide a conducive environment for biofilm growth. These include necessary factors such as planktonic bacteria, a suitable surface for adhesion, and carbon-sourced nutrients that stimulate growth. Scientists discovered that biofilm populations only require a small supply of nutrients to survive.

The hardiness of biofilms makes it possible for them to thrive in purified water systems, where nutrient levels are low. Researchers suggest that biofilm formation may serve as a bacterial survival strategy in response to low nutrient levels found in pharmaceutical environments. Through conjugation, biofilm formation enables bacterial colonies to overcome environmental threats such as osmotic shock while facilitating easier absorption of nutrients.

According to the NIH, biofilms account for 80% of microbial infections within the body. Additionally, biofilms may attach and grow on medical devices such as catheters. The dispersal of a single or clustered bacteria from a biofilm may lead to the spread of HCAIs (healthcare-associated infections) across clinical, home-care, and hospital settings. 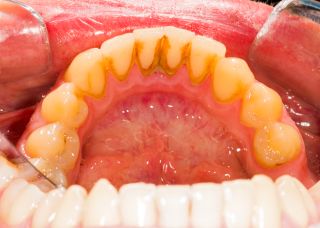 Dental plaque is a buildup of bacteria on the surface of teeth. (Image credit: Lighthunter | Shutterstock)

Dentists deal with biofilms in the form of plaque, which quickly forms and proliferates within the mouth, especially between teeth and other inaccessible areas. Oral biofilm feeds on fermentable carbohydrates such as soda and sugary substances, which increases the secretion of organic acids that erode teeth enamel, resulting in cavities.

Control and Resistance of Biofilms

Technicians may apply novel treatments and responses in water operations, where there is a constant risk of biofilm formation. Specifically, plant managers may control biofilm formation by maintaining the temperature of hot water systems between  65°C and 80°C (149°F and 176°F). Another common biofilm control method involves ozone, where the system subsequently removes ozone quantities at specific parts of the process to eliminate health risks.

In some cases, experts may need to apply elimination techniques to remove biofilm populations. These scenarios may arise from poor design and maintenance procedures, which result in a proliferation of surface bacteria. The four primary elimination techniques include UV, heat, chemicals (e.g., hydrogen peroxide and ozone), and filtration.

While research shows that bacteria may gradually adapt to external and internal pH by adjusting cellular activities according to immediate needs (such as the synthesis of proteins), they do not apply to specific functions. Specifically, the excretion of EPS fails to adapt according to fluctuating pH levels, resulting in biofilm dissolution.

In water distribution systems, technicians may apply a series of design measures to limit biofilm growth. Improvements may include smoother internal surfaces of piping (that prevent bacterial adhesion), a continuous flow rate in tanks and pipelines, and the installation of filters in water storage tanks, which reduce bacterial infection.

Proper system design and maintenance can help reduce the risks of biofilm repopulation and water contamination.

Despite its widely reported effects, some studies focused on the potential benefits of biofilm. For example, biofilms may serve as plant protection agents that promote growth through nitrogen fixation, mineral nutrient uptake, phytohormone production, and disease suppression. Another positive example of biofilm application occurs in novel wastewater treatment, where colonies neutralize and degrade organic and inorganic compounds.

Scientific communities continue to study biofilm formation and characteristics to improve control over its pathogenic pathways and develop further uses in bioremediation (introducing colonies toward breaking down environmental pollutants).

AG Scientific is the premier supplier of superior quality chemical components for academic and research purposes. Our extensive inventory includes high-grade fidaxomicin and mitomycin, applied in the study of biofilm research and treatment. Check out how we can serve as your ally in discovery!