Home Blog A23187: Uncouples Oxidative Phosphorylation and Inhibits ATPase
Back to List 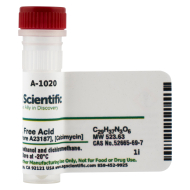 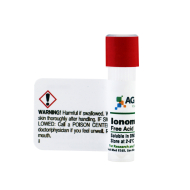 A23187 is a carboxylic acid antibiotic which simultaneously uncouples oxidative phosphorylation and inhibits ATPase of rat liver mitochondria incubated in a magnesium-free medium. 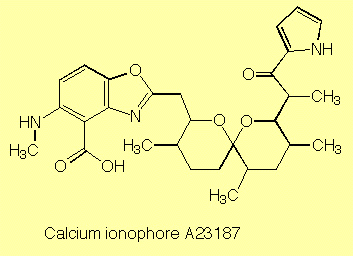 A23187 is a carboxylic acid antibiotic which simultaneously uncouples oxidative phosphorylation and inhibits ATPase of rat liver mitochondria incubated in a magnesium-free medium. The antibiotic acts as a freely mobile carrier to transport calcium and magnesium, but not potassium, from an aqueous medium buffered at pH 7.4 into a bulk organic phase. It causes a progressive release of endogenous magnesium and inorganic phosphate from mitochondria incubated with substrate, but little change in calcium or potassium content. If EDTA is added, A23187 severely depletes intramitochondrial calcium and magnesium in <30 s and produces loss of intramitochondrial potassium.

Release of State 4 succinate oxidation by A23187 is inhibited by lanthanum chloride, ruthenium red, ((ethylene bis)oxyethylene nitrilo)tetraacetic acid (EGTA), EDTA, MgCl2, and ATP. Inhibition by EGTA (or EDTA) of A23187's uncoupling is reversed readily by calcium but not magnesium.

In the presence of A23187 plus EGTA, mitochondria retain only 2 to 3 nmoles of Mg2+ per mg of protein but remain coupled and phosphorylate ADP at 80 to 85% of control rates with beta-hydroxybutyrate or succinate as substrate. Under these conditions, coupled phosphorylation supported by glutamate, and ATP hydrolysis are severely depressed, but increasing concentrations of magnesium in the incubating medium prevent these inhibitions. It is proposed that a cyclic, energy-dissipating flux of mitochondrial calcium accounts for uncoupling by A23187, whereas inhibition of ATPase and glutamate oxidation and increased potassium permeability of mitochondria result from antibiotic-mediated magnesium efflux.