Home Blog Cycloheximide (Actidione)'s Resistance to Yeast
Back to List

Cycloheximide (Actidione) is an antibiotic which inhibits eukaryotic protein synthesis. Although many yeasts including Saccharomyces cerevisiae are sensitive to cycloheximide, some yeast strains are resistant to this drug. 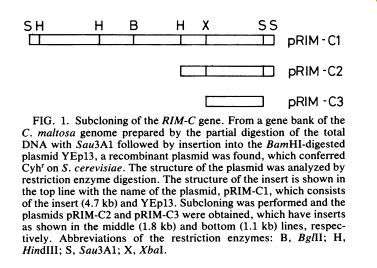 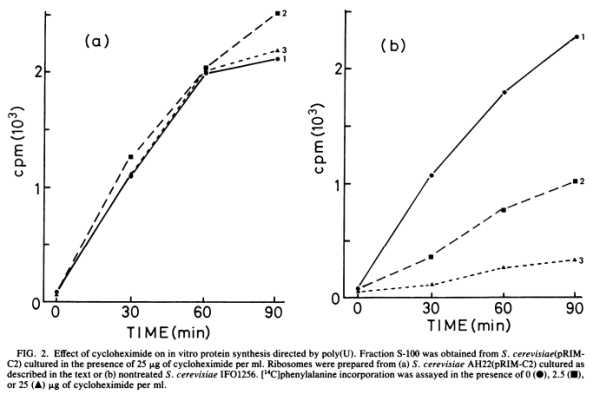 Several dominant vector markers have been recognized in S. cerevisiae (3, 6, 7, 10, 11). To use the RIM-C gene as a selectable marker of plasmids in S. cerevisiae, we recommend the following procedure. S. cerevisiae AH22 is transformed with pRIM-C2 (or pRIM-C3) by the spheroplast method. The spheroplasts are mixed with about 20 ml of YPD containing 3% agar and 1.2 M sorbitol, poured into a petri dish, and incubated overnight at 30°C. The next morning, about 10 ml of YPD containing 0.6% agar and 5 ,ug of cycloheximide per ml is poured onto the dish, which is then incubated at 30°C. After 3 to 5 days, only those cells carrying pRIM-C2 (or pRIM-C3) make colonies. By this procedure, it was confirmed that S. cerevisiae AH22 carrying either of these plasmids can be isolated without using LEU2' as a selectable marker. The numbers of LEU2+ colonies and Cyhr colonies were almost the same when these colonies were selected and counted separately. The RIM-C gene may be useful as a dominant vector marker for recombinant DNA technology of many cycloheximide-sensitive yeasts that have no selectable marker. SOURCES: M Takagi, S Kawai, I Shibuya, M Miyazaki and K Yano