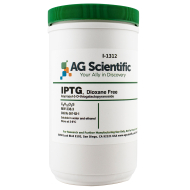 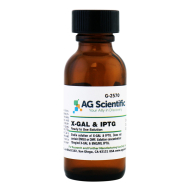 X-Gal and IPTG, Ready to Use Non-Toxic Solution

Need IPTG? Well look no further! Learn more about it in our brochure!

Figure 1. The lac system is the most widely used regulatory system in synthetic biology. Synthetic biology is an emerging field of study blending biology with mathematics, computer science, and engineering. Synthetic biologists are designing and building DNA devices to change the output of cells for important applications in medicine, energy, technology, and the environment. For systems able to produce the desired output, it became pertinent to have tight control of the genetic circuits of which can turn on and off in response to specific environmental cues due to the possibility of malfunctioning if the regulatory system does not function correctly. The objective was to improve the leaky transcription of the most widely used regulatory system in synthetic biology: the lac system. Three mutations (LacI, LacIQ, LacIQ1) of the LacI repressors (LacI, LacI-I12, LacI-X86, LacI-I12/X86) are currently known to have increasing affinity for the pLac promoter. As the dependent variable of the study, the promoters and repressors were observed as IPTG was introduced as well as removed within the system in order to discover the most desirable results. The combination of LacI and pLacQ1 produced more GFP in the presence of IPTG. Induction by IPTG was better when LacI-I12 was paired with pLAcIQ rather than pLac. GFP production in the absence of IPTG, however, was repressed better when Lac-I12 was paired with pLac. This difference may be useful depending on whether the desired output is stronger for repression or greater for induction. The resulting data can assist synthetic biologists in the future to design and build systems with more regulatory control. Read the full article here. Directed Evolution of AraC for Improved Compatibility of Arabinose- and Lactose-Inducible Promoters Sung Kuk Lee, Howard H. Chou, Brian F. Pfleger, Jack D. Newman, Yasuo Yoshikuni and Jay D. Keasling

Figure 2 and 3. The arabinose operon system involves cross talk, where an inducer of one promoter affects the expression from another promoter. Recent advances in metabolic engineering as well as synthetic biology have increased the use of multiple genes for various applications, such as the production of medicine and the construction of complex genetic circuits. Many genetic circuits, such as inverters, logic gates, pulse generators, band-pass filters, and oscillators, have been used to develop strains of bacteria. These bacterium are able to communicate in order to form two-dimensional patterns, control their population density, and attack tumor cells in response to environmental cues. Some pairs of promoters suffer from cross talk (an inducer of one promoter affects the expression from another promoter), making it difficult to simultaneously control the expression levels of multiple genes independent from manipulating the entire system. An example of cross talk involves a system containing two of the most useful promoters for gene expression in bacteria: the IPTG (isopropyl-_-D-1-thiogalactopyranoside)-inducible lac promoter (Plac) and the arabinose-inducible araBAD promoter (PBAD). In this study, IPTG is an inhibitor of the PBAD expression system. Cross talk between the PBAD and Plac promoters prevented them from being used simultaneously in the same cell over wide ranges of expression levels. A mutant library of the arabinose-binding regulatory protein AraC was therefore constructed, screening mutants displaying insensitivity to IPTG in order to overcome the cross talk. A better understanding of how IPTG interacts with the PBAD system would allow directed mutagenesis techniques to be applied in order to alleviate inhibition by IPTG. Read full article here. Regulating Synthetic Gene Metworks in 3D Materials Tara L. Deans, Anirudha Singh, Matthew Gibson, and Jennifer H. Elisseeff

Figure 4. In the presence of biomaterial such as the Lacl protein, IPTG is able to bind to these biomaterials to perform desirable and predictable tasks. Combining synthetic biology and material science will enable more advanced studies of cellular regulatory processes in addition to facilitating therapeutic applications of engineered gene networks. One approach is to couple genetic inducers into biomaterials, thereby generating 3D microenvironments that are capable of controlling intrinsic and extrinsic cellular events. The flexibility of modifying biomaterials with genetic inducers allows for patterned placement of these inducers that can be used to generate distinct patterns of gene expression. The therapeutic potential of cells carrying engineered genetic circuits has been seen through strategies employed to remediate or control diseases (e.g. type II diabetes) to promote biofilm degradation as well as treating cancer. Together, these genetically interactive materials can be used to characterize genetic circuits in environments that more closely mimic cells natural 3D setting, better explore complex cell matrix and cell cell interactions, and facilitate therapeutic applications of synthetic biology. A versatile approach for genetic circuit activation was introduced via attaching IPTG to several different classes of biomaterials. This versatility is important because different biomaterials promote distinct morphological and lineage characteristics that have significant application dependent experimental and therapeutic relevance.  This approach provides additional levels of gene control because various materials provide unique techniques to release inducers providing flexibility of inducer exposure.   In addition, the genetic inducer IPTG is already compatible with other sophisticated genetic circuits similar to LTRi that have been developed for reprogramming cells to perform desirable and predicable tasks. This raises the exciting potential that multiple genetic circuits activated by distinct chemical inducers could be combined within one material that could control various synthetic circuits with distinct dynamic patterns. Read full article here. Related: Click here for our free IPTG Brochure or please fill out the form below for our Free IPTG E-Guide : [pardot-form id="1966" title="IPTG Guide Download"] References November 13, 2013. BOLO, 23 Nov. 2013. Web. 25 Jan. 2016. 2016. "BME494s2013 Project Team1." OpenWetWare RSS. OpenWetWare, n.d. Web. 25 Jan. 2016. N.p., n.d. Web. 25 Jan. 2016.