Paclitaxel, Taxus brevifolia, commonly known as the Pacific yew, is a member of the yew family (Taxaceae). It is a small, slow growing evergreen tree native to the northwestern United States (Wheeler et al., 1992).

Paclitaxel, Taxus brevifolia, commonly known as the Pacific yew, is a member of the yew family (Taxaceae). It is a small, slow growing evergreen tree native to the northwestern United States (Wheeler et al., 1992). In 1971, a natural product called taxol that was isolated from T. brevifolia. Taxol has been found to be a mitotic inhibitor used for cancer chemotherapy. 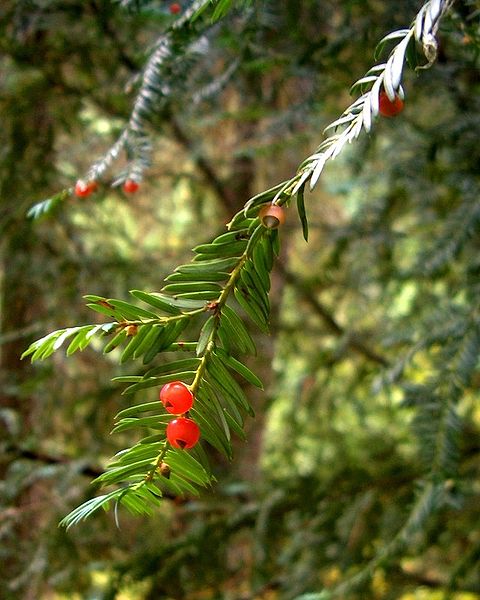 Taxol is derived from the bark of the Pacific yew which is a potentially limited source (Wheeler et al., 1992). This limitation has been overcome by combined efforts of pharmaceutical, agricultural, and governmental agencies (Foa et al., l994). Using analytical methods, the needles and stems of the Taxus species are examined for 10-deacetyl baccatin III, a related compound that could be converted to taxol through a semi-synthetic route (Witherup et al., 1990). The concentration of taxol is less in the tips of the branches than at the base of the trunk because branch tips have more taxol in the phloem tissue, and the inner bark is thinner. Concentrations were generally lower in the needles than in the bark. Concentrations of taxol in the bark increased from May through August while the concentration in the needles changed little during that time (Vance et al., 1994) Taxol's mechanism of antitumor activity is unique because it promotes microtubule assembly and stabilizes the microtubules, thus preventing mitosis(Huizing et al., 1995). Taxol does this by reversibly and specifically binding to the B subunit of tubulin, forming microtubule polymers leading to growth arrest in the G2/M phase of the cell cycle (Gotaskie and Andreassi, 1994). This makes taxol unique in comparison to vincristine and vinblastine which cause microtubule disassembly (Gatzemeier et al., 1995). Additionally, recent evidence indicates that the microtubule system is essential to the release of various cytokines and modulation of cytokine release may play a major role in the drug's antitumor activity (Smith et al., 1995). Due to taxol's antimitotic activity, it is a useful cytotoxic drug in treating several classic refractory tumors including head and neck cancer, small cell and non-small cell lung cancer and most notably breast and ovarian carcinomas. It may also slow the course of melanoma. Response rates to taxol treatment varies among cancers. Advanced drug-refractory ovarian cancer responds at a 19-36% rate, previously treated metastatic breast cancer at 27-62%, and various lung cancers at 21-37%. Taxol has also been shown to produce complete tumor remission in some cases (Guchelaar et al., 1994). In addition, taxol plus radiation treatment has an additive but not synergistic effect as shown in an experiment using a cervical carcinoma line (Minarik and Hall, 1994). Elderly patients aged more than 60 years did not differ with respect to administered dose intensity, number of cycles of therapy administered, or the occurrence of serious or mild toxicities (Bichner et al., 1993). Thus, elderly patients receiving taxol can be treated as aggressively as younger patients. Clinically, taxol treatment is a possible adjunct to radiation. Sources: Maria Costello and Kelly Kellmel