Home Blog 11 Applications for Leupeptin, Hemisulfate
Back to List

Leupeptin is a protease inhibitor that is produced naturally by some species of the soil bacteria Streptomyces and thus inhibits the degradation of proteins. Unlike many synthetic protease inhibitors, it has very low toxicity to humans. This compound has been shown in research on animal models to protect hair cells in the ear from being killed by loud noise as well as certain antibiotics, and in turn prevents hearing loss. 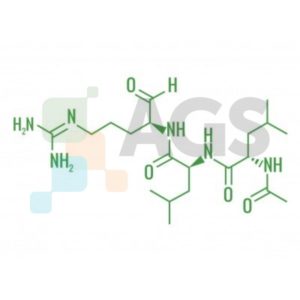 Leupeptin is a protease inhibitor that is produced naturally by some species of the soil bacteria Streptomyces and thus inhibits the degradation of proteins. Unlike many synthetic protease inhibitors, it has very low toxicity to humans. This compound has been shown in research on animal models to protect hair cells in the ear from being killed by loud noises as well as certain antibiotics, and in turn prevented hearing loss. Leupeptin is widely used during the first part of protein purifications to keep proteases in the tissue from degrading the protein of interest. This natural product is a small peptide, a molecule composed of three linked amino acids that have some unusual attributes. The amino group of the compound has an acetyl CH3CH2 group on it. Additionally, the carboxy group is chemically different than most peptides and proteins, because it has an aldehyde group instead of a carbonyl moiety. Proteases fall into a number of classes. The first major distinction is whether they cleave in the middle of the molecule, like endopeptidases, or whether they nibble along at the ends of the molecules, like exopeptidases. Leupeptin inhibits proteases with endopeptidase activity. There are also further classifications based on the structure of the active site, such as cysteine and serine proteases. This protease inhibitor prevents the activity of some of these types of enzymes, such as trypsin and proteinase K, while also being ineffective with others such as the chymotrypsins.

Why is Leupeptin Important?

The breadth of protease inhibition by leupeptin makes it a very useful compound in biochemical research and large-scale protein production. Generally, when one starts to isolate a protein from a biological source, the disruption of the tissue releases a large number of proteases that can start degrading the protein of interest. Biochemists usually include a cocktail of protease inhibitors to prevent the destruction of the protein. Due to its potency, activity on a broad range of proteases, and low toxicity, leupeptin is frequently a component of such mixtures. Ear hairs can be destroyed by prolonged exposure to noise over 80 decibels, meningitis, ear infections, certain antibiotics and anticancer drugs, aging, and heredity (5). Studies with animal models have shown that leupeptin has promise in protecting hair cells and preventing a large degree of hearing loss after subjecting the mammals to loud noise or certain antibiotics. Aminoglycoside antibiotics tend to be the type that can cause hearing loss, including drugs such as gentamycin and neomycin.

Leupeptin is a reversible competitive inhibitor of serine and thiol proteases.

It has been reported to inhibit calpain 5, cathepsin B6, cathepsins H and L7 and trypsin. A typical working concentration is in the range of 10 to 100 uM. Leupeptin does not inhibit Chymotrypsin, Elastase, Renin, or Pepsin. Leupeptin appears to be equally effective in any salt form, adjusting for equivalent peptide content. The hemisulfate salts were the first to be commercially available. Of the three salts, the hydrochloride is the least invasive form in biological settings. No problem or preference for the trifluoroacetate (TFA) form has been noticed; TFA is volatile, so could possibly be removed by lyophilization. Additonal Reading References