A-83-01 Considered A Fighting Component in Cancer Treatment 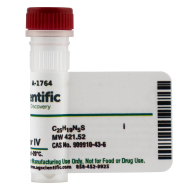 In a study on how the ALK-5 inhibitor A-83-01 inhibits Smad signaling and epithelial-to-mesenchymal transition by transforming growth factor-Î², A-83-01 was synthesized and characterized a small molecule inhibitor. It is structurally similar to previously reported ALK-5 inhibitors developed by Sawyer et al. (2003) and blocks signaling of type I serine/threonine kinase receptors for cytokines of the TGF-Î² superfamily (known as activin receptor-like kinases; ALKs).

In a study on how the ALK-5 inhibitor A-83-01 inhibits Smad signaling and epithelial-to-mesenchymal transition by transforming growth factor-β, A-83-01 was synthesized and characterized a small molecule inhibitor. It is structurally similar to previously reported ALK-5 inhibitors developed by Sawyer et al. (2003) and blocks signaling of type I serine/threonine kinase receptors for cytokines of the TGF-β superfamily (known as activin receptor-like kinases; ALKs). Using a TGF-β-responsive reporter construct in mammalian cells, it is found that A-83-01 inhibited the transcriptional activity induced by TGF-β type I receptor ALK-5 and that by activin type IB receptor ALK-4 and nodal type I receptor ALK-7, the kinase domains of which are structurally highly related to those of ALK-5. A-83-01 was found to be more potent in the inhibition of ALK5 than a previously described ALK-5 inhibitor, SB-431542, and also to prevent phosphorylation of Smad2/3 and the growth inhibition induced by TGF-β. In contrast, A-83-01 had little or no effect on bone morphogenetic protein type I receptors, p38 mitogen-activated protein kinase, or extracellular regulated kinase. Consistent with these findings, A-83-01 inhibited the epithelial-to-mesenchymal transition induced by TGF-β, suggesting that A-83-01 and related molecules may be useful for preventing the progression of advanced cancers. (Cancer Sci2005; 96: 791-800) Members of the transforming growth factor-β (TGF-β) superfamily, including TGF-β, activin, nodal, and bone morphogenetic proteins (BMPs), are multifunctional cytokines that regulate a wide range of cellular responses, including cell proliferation, differentiation, adhesion, migration, and apoptosis. TGF-Î² and related proteins transduce signals through two distinct serine/threonine kinase receptors, termed type I and type II. The type II receptors are the primary ligand binding receptors at the cell surface and contain constitutively active kinases, which phosphorylate corresponding type I receptors. Seven type I receptors termed activin receptor-like kinase (ALK) 1 through 7 have been identified in mammals. ALK-4, ALK-5, and ALK-7 are structurally highly related to each other and transduce similar, though not identical, intracellular signals. TGF-β and activin bind to ALK-5 (type I TGF-β receptor; TβR-I) and ALK-4 (type IB activin receptor; ActR-IB), respectively. Signals for nodal proteins are transduced by ALK-4 as well as ALK-7. In contrast, ALK-1, -2, -3 and -6 transmit signals similar to each other's. BMPs bind to ALK-2, ALK-3 (type IA BMP receptor; BMPR-IA), and ALK-6 (type IB BMP receptor; BMPR-IB), whereas ALK-1 is highly expressed in endothelial cells and binds to TGF-β in these cells. The roles of TGF-β in cancer biology are complex; TGF-β can suppress or promote tumor growth depending on the type of cancer. The ability of TGF-β to potently inhibit the proliferation of epithelial, endothelial, and hematopoietic cell lineages is central to its tumor-suppressive effects. However, as tumors evolve, they often become refractory to TGF-β-mediated growth inhibition and overexpress TGF-β, which induces epithelial-to-mesenchymal transition (EMT) of tumor cells and facilitates immunosuppression, extracellular matrix deposition, and angiogenesis. It was recently reported that inhibition of autocrine TGF-β signaling in carcinoma cells reduces cell invasiveness and tumor metastasis, and that these effects of TGF-β are closely associated with the ability of TGF-β to induce EMT and stimulate cell migration. The TGF-β signaling pathway has correspondingly become an attractive target for drug development in the field of oncology. Sources: