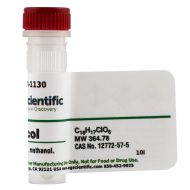 Eating to defeat cancer can simply be done by adding a few cancer fighting angio foods to your meals each day. Why not choose foods that can help reduce your risk of disease?

You can fight cancer with food! Eat to starve cancer: we've listed some of the best anti-angiogenic foods to help you get the most cancer-fighting benefits from your diet. 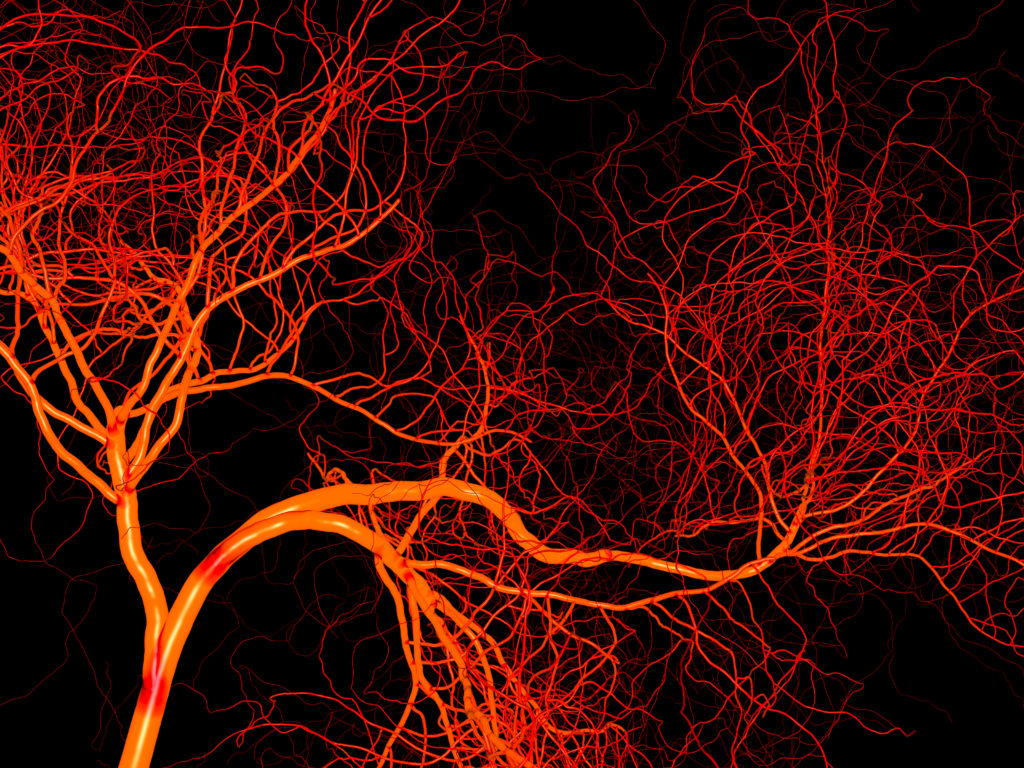 In Greek, "angio" means vessels and "genesis" is birth - thus angiogenesis is the creation of new blood vessels.  Blocking angiogenesis in cancerous tumors enables us to undercut the spread of the disease. Cancers can hijack the process of angiogenesis to recruit their own private blood supply and feed themselves. Without these lifelines, cancers remain tiny and can't become dangerous. Many foods and beverages contain natural cancer-starving molecules that prevent tumors from acquiring blood vessels. 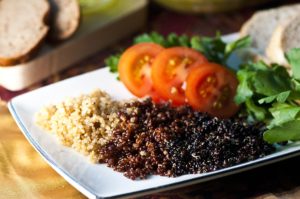 Quinoa:  Many of the phenolic substances identified in quinoa, including genistein, quercetin, and kaempferol, have anti-angiogenic properties, or the ability to inhibit new blood vessel growth, and also suppress the proliferation of cancer cells. The edible seeds of the quinoa plant are rich in protein, unsaturated fats, and essential vitamins and minerals. Quinoa also contains beneficial polyphenols that may help to reduce the risk of cardiovascular disease and cancer. 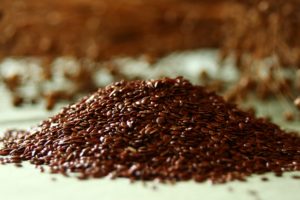 Flaxseed: Studies have shown that regular consumption of flaxseed, also known as linseed, increases levels of a natural angiogenesis inhibitor called endostatin. In the study, healthy premenopausal women who had 25 grams of freshly ground flaxseed added to their daily diets had significant increases in levels of endostatin in their breast tissue. Endostatin is an endogenous (naturally occurring) substance in the body that inhibits angiogenesis. This is one of the first studies to show that a particular food can raise levels of an endogenous inhibitor of angiogenesis in the body. 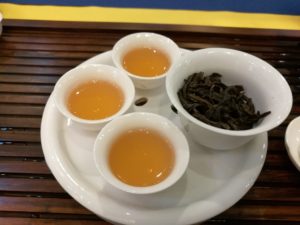 Oolong Tea: Oolong tea is a partially fermented tea that is consumed heavily in Asian countries. Like green tea and black tea, oolong contains substances called polyphenols that have been shown to have chemopreventive (cancer-preventing) properties. The major primary polyphenols in unfermented green tea leaves are catechins, with (-)-epigallocate- chin-gallate (EGCG) being the primary active component. EGCG has been shown in numerous studies to have antiangiogenic and anti-tumor activities. 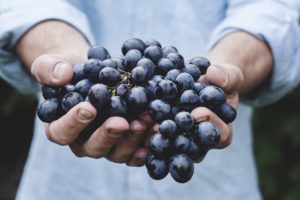 Grapes: Grapes and red wine are high in polyphenols, powerful antioxidants that have been shown in numerous studies to have anti-cancer, anti-inflammatory and heart-protecting effects. Extracts from grapes and their seeds contain various polyphenols with anti-cancer and anti-inflammatory activity, including resveratrol, gallic acid, epigallocatechin-gallate (EGCG), epigallocatechin (ECG), epicatechin-3-gallate, epicatechin, and proanthocyanidins. The cancer-fighting properties of these compounds have been attributed to their ability to inhibit proliferation of tumors cells and to suppress the growth of tumor blood vessels (angiogenesis).

Chocolate and Cocoa: Chocolate, the fermented byproduct from processed cocoa, contains high levels of bioactive flavanoids (polyphenols) that are formed during the fermentation process. Two flavanoids in particular, catechins and procyanidins, are highly concentrated in dark chocolate and cocoa powder. Observational studies indicate that catechins and procyanidins may protect against a number of chronic diseases, notably cardiovascular disease and cancer.The cancer-protecting (chemoprotective) activity of catechins and procyanidins is likely related to their ability to inhibit proliferation of cancer cells, remove toxins from the body, reduce inflammation, and suppress angiogenesis. 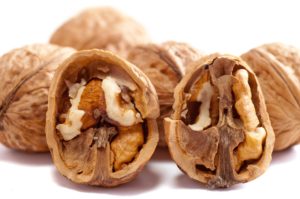 Walnuts: Walnuts contain a number of compounds with anti-tumor effects. One of these, ellagic acid, has been shown to inhibit colon cancer cell proliferation and angiogenesis in a number of laboratory studies. Flaxseed oil has a similar effect as walnuts on tumor growth, but does not suppress angiogenesis to the same degree. 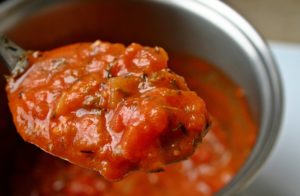 Tomato Sauce: Tomatoes and processed tomato products contain lycopene, a cartenoid antioxidant with potent antioxidant and anti-angiogenic activity. Regular consumption of foods containing lycopene has been found to reduce the risk for some cancers, making it intriguing as a dietary supplement for cancer prevention. In a recent study, researchers found that regular consumption of tomato paste can protect against skin damage caused by exposure to ultraviolet radiation (UVR), such as occurs with long-term sun exposure. 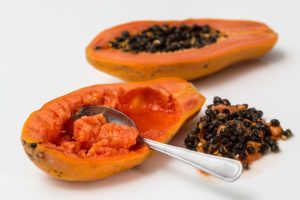 Papaya and other bright colored fruits: Recent studies have provided more evidence that foods high in carotenoids, natural organic pigments with anti-angiogenic properties, could lower the risk of certain cancers. Carotenoids such as lycopene, are found in many brightly colored fruits and vegetables. The tropical fruit papaya is a particularly good source. One study found that consumption of high levels of carotenoids from papayas was associated with a 50% risk reduction of breast cancer. Papaya is high in the carotenoid beta-cryptoxanthin, and has also demonstrated a reduction in the risk of gallbladder cancer. These findings are illuminating because they suggest that the benefits of carotenoid circulation are most effective in women with a higher risk of breast cancer. 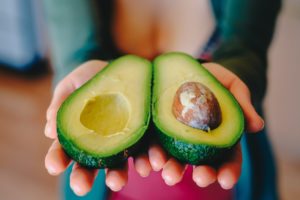 Avocados: Avocados contain anti-angiogenic compounds such as lutein that are being studied for their cancer-fighting abilities. In laboratory mice, lutein was shown to have a significant protective effect against colon cancer. In other research, lutein was used to prevent the proliferation of blood vessels in the eyes of mice. This may eventually prove valuable in preventing eye diseases spurred by uncontrolled blood vessel growth, a process that can ultimately cause blindness. Finally, recent research has suggested that the content of carotenoids like lutein is highest in avocados that have been ripened for less than 10 days after harvesting. 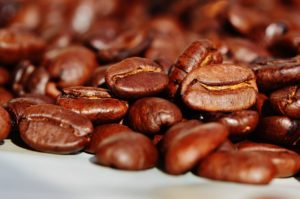 Coffee: Epidemiological studies have shown that people who regularly drink coffee are at reduced risk for several types of cancer. In one pooled analysis of two prospective cohort studies, Japanese researchers found about a 40% decreased risk of primary liver cancer among people who drank at least one cup of coffee per day compared with those who didn't drink any. Coffee contains hundreds of bioactive substances including chlorogenic acid, some of which are anti-inflammatory and antiangiogenic. Unfiltered coffee contains another substance called kahweol which was shown in a series of experiments to be a potent inhibitor of angiogenesis.

There is also aggressive on-going scientific research to identify compounds with anti-angiogenesis effects that could be used for the treatment of various cancers. AG Scientific has had broad success with a combination of fermentation and synthesis contracts, allowing us to build a catalog of over 150 antibiotics, many with promising anti-cancer potential.