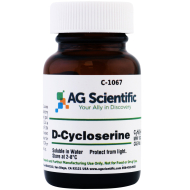 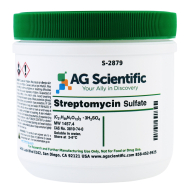 Mycobacterium is a genus of Actinobacteria, given its own family, the Mycobacteriaceae. The genus includes pathogens known to cause serious diseases in mammals, including tuberculosis (Mycobacterium tuberculosis) and leprosy (Mycobacterium leprae). All Mycobacterium species share a characteristic cell wall, thicker than in many other bacteria, which is hydrophobic, waxy, and rich in mycolic acids/mycolates. The cell wall consists of the hydrophobic mycolate layer and a peptidoglycan layer held together by a polysaccharide, arabinogalactan. The cell wall makes a substantial contribution to the hardiness of this genus. The biosynthetic pathways of cell wall components are potential targets for new drugs for tuberculosis.   Cycloserine (CS, 4-amino-3-isoxazolidone) is a cyclic amino acid mimic that is known to inhibit many essential pyridoxal 5-phosphate (PLP)-dependent enzymes. Two CS enantiomers are known; D-cycloserine (DCS, also known as Seromycin) is a natural product that is used to treat resistant Mycobacterium tuberculosis infections as well as neurological disorders since it is a potent NMDA receptor agonist, and L-cycloserine (LCS) is a synthetic enantiomer whose usefulness as a drug has been hampered by its inherent toxicity arising through inhibition of sphingolipid metabolism. Previous studies on various PLP-dependent enzymes revealed a common mechanism of inhibition by both enantiomers of CS; the PLP cofactor is disabled by forming a stable 3-hydroxyisoxazole/pyridoxamine 5-phosphate (PMP) adduct at the active site where the cycloserine ring remains intact. Here we describe a novel mechanism of CS inactivation of the PLP-dependent enzyme serine palmitoyltransferase (SPT) from Sphingomonas paucimobilis. SPT catalyses the condensation of L-serine and palmitoyl-CoA, the first step in the de novo sphingolipid biosynthetic pathway. We have used a range of kinetic, spectroscopic and structural techniques to postulate that both LCS and DCS inactivate SPT by transamination to form a free pyridoxamine 5-phosphate (PMP) and beta-aminooxyacetaldehyde that remain bound at the active site. We suggest this occurs by ring opening of the cycloserine ring followed by decarboxylation. Enzyme kinetics show that inhibition is reversed by incubation with excess PLP and that LCS is a more effective SPT inhibitor than DCS. UV-visible spectroscopic data, combined with site-directed mutagenesis, suggest that a mobile Arg378 residue is involved in cycloserine inactivation of SPT.   Streptomycin is an antibiotic drug, the first of a class of drugs called aminoglycosides to be discovered, and was the first antibiotic remedy for tuberculosis. Streptomycin is a protein synthesis inhibitor. It binds to the small 16S rRNA of the 30S subunit of the bacterial ribosome, interfering with the binding of formyl-methionyl-tRNA to the 30S subunit. This leads to codon misreading, eventual inhibition of protein synthesis and ultimately death of microbial cells through mechanisms that are still not understood. Speculation on this mechanism indicates that the binding of the molecule to the 30S subunit interferes with 50S subunit association with the mRNA strand. This results in an unstable ribosomal-mRNA complex, leading to a frameshift mutation and defective protein synthesis; leading to cell death. Streptomycin is an antibiotic that inhibits both Gram-positive and Gram-negative bacteria, and is therefore a useful broad-spectrum antibiotic.   Source: Inhibition of the PLP-dependent enzyme serine palmitoyltransferase by cycloserine: evidence for a novel decarboxylative mechanism of inactivation Jonathan Lowther ,  Beverley A. Yard ,  Kenneth A. Johnson , et al. Wikipedia.

ANTIBIOTICS AGAINST BY MYCOBACTERIA EXAMPLES: