Home Blog Collagenase Enzymes: History, Applications, and Mechanisms of Action
Back to List 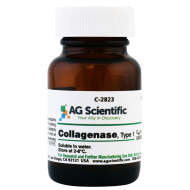 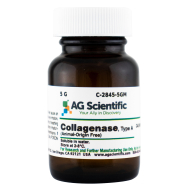 Since their initial discovery in the 1950s, collagenase enzymes now play a key role in modern scientific research. They have also been approved for therapeutic use when aiming to treat Peyronie's disease and Dupuytren's, and also actively support wound healing.

Since their initial discovery in the 1950s, collagenase enzymes now play a key role in modern scientific research. They have also been approved for therapeutic use when aiming to treat Peyronie's disease and Dupuytren's, and also actively support wound healing.   There are various collagenases available, each of which are recommended for specific cells (i.e. liver, bones, heart, or thyroid cells). This allows researchers to actively research a wide range of conditions and diseases, particularly when cell isolation is required.

The History Behind Collagenase Enzymes

The majority of what is presently known about collagenase was first discovered based on studies conducted in the 1950s. These pioneering studies were conducted by Mandi, Seifter, Harper, and their team, which was later supported by Bond and Van Wart. By 1959, one preparation of collagenase became commercially available, which was isolated from Clostridium histolyticum.   Up until 1962, the research surrounding collagenases focused on the class known as clostridial collagenases. That year, vertebrate collagenase was discovered in bullfrog tadpole tissue, followed by a vast number of collagenases in other samples of bacteria, amphibians, marine life, and mammals.   As research continued into the 1980s, it was found that several collagenases existed, ranging in molecular weight. Based on key properties, they were then categorized under either Class I or Class II. Although they share key similarities, differences lie in regards to their amino acid composition, activities, and stabilities.   Upon this discovery, it became possible to better study various human diseases in regards to their pathology and potential treatment. Today, collagenase enzymes are used for a wide range of scientific purposes. For example, in 2013, the FDA approved Collagenase Clostridium histolyticum (Cch), which has largely been utilized to study a nonoperative treatment for Peyronie's disease (PD) -- which causes issues due to scar tissue.

Collagenase enzymes are able to effectively breakdown the peptide bonds found in collagen. Based on an increased interest in non-invasive therapeutic methods, collagenase enzymes are being studied for their ability to catalyze key chemical processes -- more specifically, collagen degradation.   As seen in various in vivo and in vitro tests, injectable forms of collagenase have been shown to promote wound healing. With their unique ability to degrade collagen that is resistant to breakdown, collagenases can more effectively treat wounds, even those associated with third-degree burns.   This is believed to be based on the fact that once collagen is degraded by collagenase, select inflammatory cells, including macrophages, are able to enhance migration and in turn, their efficiency. That is why ointments containing C. collagenase are often applied to wounds, assisting in the removal of necrotic tissue. Since this type of dead tissue prolongs the inflammatory stage and enhances bacterial growth, collagenase supports proactive healing.   While wound healing is imperative when aiming to reduce the risk of infection, the applications of collagenase enzymes are far-reaching in regards to scientific research and discovery.

Although there was only one type of crude enzyme back in the early 1960s, there are now four basic profiles which target varying cell types. For example, Type 1 is typically recommended for liver, epithelial, lung, adrenal tissue, and fat cell preparations. In contast, Type 2 is most often used when targeting muscle, thyroid, heart, bone, and cartilage.   In terms of cartilage, collagenases were the first of the matrix metalloproteinase enzymes (MME) to be used to better understand the process of cartilage destruction among patients with rheumatoid arthritis. The same is true for osteoarthritis, as the degradation of collagen is believed to be the first irreversible step in the pathology of this degenerative condition.   It is also often used strictly for cell isolation. In this case, the goal is to maximimze the number of viable, dissociated cells. By degrading collagen, as well as other key proteins, collagenase enzymes release cells, supporting a wide range of research efforts.   Collagenase Type 1, for instance, is often used when studying various species, including mice, rats, humans, and non-human primates. With applications in stem cell biology, immunology, and cancer research, collagenase is an all-important catalyst.

With their ability to cut the triple helical protein chains of collagen, collagenase enzymes work by targeting all forms of mammalian collagen, resulting in cell isolation. More specifically, collagenase enzymes work by degrading the collagen found in the extracellular matrix. This collection of molecules is what essentially anchors cells to tissue, providing both biochemical and structural support.   Depending on the class of collagenase, once the tissue is exposed to collagenase enzymes, it will bind to and cut either the ends of a collagen fibril or the middle of a collagen monomer. Once the structure of the triple helical is cut, they begin to unravel and denaturation takes place. At this point, it essentially becomes gelatin.   From wound healing and scar contractures to research and disease prevention, collagenase enzymes will continue to play an important role within the scientific community, aiding and accelerating key discoveries.