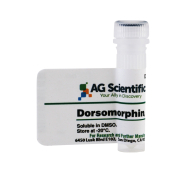 When it comes to emerging fields of science, such as mechanobiology (the study of structural biology), having access to the newest biochemical reagents may be crucial part of your expermintal design. That's why one of the main services AG Scientific brings to the table is not only the latest in scientific research, but the latest in biochemical reagants, as well.

When it comes to emerging fields of science, such as mechanobiology (the study of structural biology), having access to the newest biochemical reagents may be crucial part of your expermintal design. That's why one of the main services AG Scientific brings to the table is not only the latest in scientific research, but the latest in biochemical reagants, as well.

By mapping cell fates and using gene knockout techniques, it was discovered that the main gene responsible for dorsal fate differentiation is Dorsalin-1 [2]. When Dorsalin-1 is expressed, the BMP (bone morphogenic protein) and TGF-b signaling pathways begin to spatially position the epithelial-to-mesenchymal transition (EMT). During embryonic development, this is officially when gastrulation begins, a dramatic process where the endoderm and mesoderm shift from the outer surface of the embryo to the inside where they will later develop into the internal organs [2]. All these actions work together to ensure the dorsal region is able to counter-act the force of resistance caused from growth in the opposite ventral region [2].

Exposure to dorsomorphin in laboratory animals inhibits hepcidin expression [3]. In return for stimulating iron from the RES, erythropoiesis begins and the symptoms of anemia diminish. According to other leading researchers, hepcidin lowering agents, such as dorsomorphin, represent a promising new class of pharmacologic drugs, which may help patients effectively recover from anemia.

The hard fact is that anemia of chronic inflammation (ACI) is the most frequent case of anemia reported in hospitals, and it is associated with high morbidity [3].

The Royal Society of Chemistry concluded in 2011, A major underlying mechanism of ACI is the retention of iron within cells of the reticuloendothelial system (RES), thus making the metal unavailable for efficient erythropoiesis. This reticuloendothelial iron sequestration is primarily mediated by excess levels of the iron regulatory peptide hepcidin down-regulating the functional expression of the only known cellular iron export protein ferroportin resulting in blockade of iron egress from these cells. Using a well-established rat model of ACI, we herein provide novel evidence for effective treatment of ACI by blocking endogenous hepcidin production using the small molecule dorsomorphin derivative LDN-193189 or the protein soluble hemojuvelin-Fc (HJV.Fc) to inhibit bone morphogenetic protein-Smad mediated signaling required for effective hepcidin transcription. [3]

Less is known about its effects in humans, but phase 1 clinical trial (NCT01251562) have already begun [4]. For more information go to: Clinicaltrials.gov

Dorsomorphin when used in combination with SB431542

Dorsomorphin promotes human embryonic stem cell self-renewal by decreasing BMP signaling. New evidence is emerging that dorsomorphin and SB431542, when used in combination with the other, can disrupt the normal developmental programming of an embryo to induce neural differentiation [5]. According to The Royal Society of Chemistry, dorsomorphin and SB431542 are both classified among a group of other small molecules, â€œinvolved in promoting self-renewal, maintenance of the pluripotent state or other mechanisms that could improve reprogramming efficiency. [3]

By itself, SB431542 increases reprogramming in mouse fibroblasts, and has also been shown to generate iPSCs from human skeletal myoblasts [5].

SB431542 can induce the differentiation of human ESCs and iPSCs to neural lineages [6].

Other examples of small molecules that are considered effective inhibitors of the TGF signaling pathway are SB431542, RepSox, and A-83-01, and all can be useful at reprogramming stem cells [5].

During early embryogenesis, these positioning signals produce mesenchymal stem cells (MSC). Within weeks, these MSCs will establish their niche and begin generating induced pluripotent stem cells (iPSCs) and undergo the mesenchymal-to-epithelial transition (MET), a biological process that leads to pluripotency. Therefore, inhibition of genes and proteins related to EMT, such as Dorsomorphin and SB431542, and other BMP or TGF-b associated proteins, are some of the new tools available from A.G Scientifics diverse product catalogue.

Handling: Protect from air and light

USAGE: For Research Use Only! Not For Use in Humans.

Description: A potent and selective inhibitor of the TGF-Î²1 receptor ALK5 (ICâ‚…â‚€ = 94 nM). It inhibits ALK4 only at higher concentrations (ICâ‚…â‚€ = 140 nM). Suppresses renewal in embryonic and induced pluripotent stem (iPS) cells and promotes their differentiation through its effect on Smad signaling pathway.

Handling:  Protect from air and light

USAGE: For Research Use Only! Not For Use in Humans.