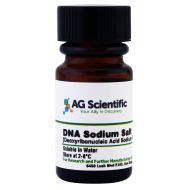 DNA (Deoxyribonucleic Acid) is often referred to as the blueprint for life. This is because DNA is made up of genes, which encode for the information required to produce functional proteins. describe the imageFor decades it was believed that only higher order, multi-cellular life possessed the cellular machinery necessary to provide its host with adaptive immunity. We now know that DNA is routinely edited in bacteria as part of their own adaptive immune response, which is made possible largely because of an enzyme called CRISPR â€“ pronounced â€˜crisperâ€™.

DNA (Deoxyribonucleic Acid) is often referred to as the blueprint for life. This is because DNA is made up of genes, which encode for the information required to produce functional proteins.

For decades it was believed that only higher order, multi-cellular life possessed the cellular machinery necessary to provide its host with adaptive immunity. We now know that DNA is routinely edited in bacteria as part of their own adaptive immune response, which is made possible largely because of an enzyme called CRISPR pronounced crisper. CRISPR, which stands for clustered regularly interspaced short palindromic repeats, was first detected in bacteria in the 1980s as an immune defense used against invading bacteriophages. While this research produced new and interesting discoveries, the full significance would not be understood until many years later with the discovery of the Cas9 gene (published in March 2011 under its former name of CSN1), an enzyme for cutting both strands of DNA, found in the bacterium Stroptococcus pyogenes [1]. Adaptive immunity in bacteria Just two years ago, a landmark research paper by Emmanuelle Charpentier, Jennifer A. Doudna, and colleagues, discovered the CRISPR enzyme binds and alters the structure of DNA. Their report appears to be the first group to publish their findings that the bacterial immunity system (originally discovered by the Danisco group) can be harnessed for its gene-editing capabilities. The results were published in an August 2012 report in the journal Science and revealed a fundamental piece of information crucial if genome-editing tools are ultimately going to be used to correct genetic diseases in humans [2]. It appears from their research that CRISPR enzymes are, in fact, quite sophisticated. Each one can be individually tailored to target and correct a single combination of base pairs within the roughly three billion base pairs contained in the human genome. This pinpoint accuracy is the equivalent of finding and then correcting a single misspelled word in a 23-volume encyclopedia. To find the proverbial needle in a haystack, CRISPR enzymes link with a multi-protein complex called Cascade. This protein-RNA complex guides the CRISPR-RNA (crRNA) to its specific DNA target. The CRISPR enzyme then features the use of RNA in a sequence-specific structure called the R-loop, which separates the double-stranded DNA and inserts the new RNA code [3]. This mechanism provides bacteria with an adaptive immune defense.

CRISPR is an RNA-guided gene-editing platform that makes use of a bacterially derived protein (Cas9) and a synthetic guide RNA to introduce a double strand break at a specific location within the genome. Editing is achieved by transfecting a cell with the Cas9 protein along with a specially designed guide RNA (gRNA) that directs the cut through hybridization with its matching genomic sequence. (Image courtesy of: Nature Reviews)
Professor Mark Szczelkun and his team from Bristol University's School of Biochemistry observed the formation of the R-loop using specially modified microscopes in which the DNA molecule is stretched within a magnetic field. By altering the twisting force on the DNA, they could monitor the R-loop by single CRISPR enzymes [4]. This technique also revealed other previously hidden steps in the gene editing process and allowed them to probe deeper into how the precise order of base pairs influence the CRISPR enzyme. Professor Szczelkun, said: "An important challenge in exploiting these exciting genome editing tools is ensuring that only one specific location in a genome is targeted. He continues, "Our single molecule assays have led to a greater understanding of the influence of DNA sequence on R-loop formation. In the future, this will help in the rational re-engineering of CRISPR enzymes to increase their accuracy and minimize off-target effects. This will be vital if we are to ultimately apply these tools to correct genetic diseases in patients." [5] Cascading into focus More recently, it was shown that the Cas9 arm of the CRISPR enzyme can be used to edit the human genome. A key element of the gene-editing technique known as CRISPR/Cas9 uses Cas9, which is a bacterial gene for the CRISPR enzyme that snips both strands of the DNA double helix at the same location. CRISPR/Cas9 editing system differs from other existing gene-editing tools such as Zinc Finger Nucleases (ZFNs) and Transcription activator-like effector nucleases (TALENs) since it does not rely on protein design. The simplicity of its use means less time and fewer resources are required when contrasted with these other methods [6]. Any future commercial applications of CRISPR could range anywhere from treating genetic diseases and cancer, and its use will dependent to a large extent on the Cas9 gene and who owns the intellectual property rights to that part of the invention. Patent disputes tend to focus on who did what and when. It seems in terms of the Cas9 discovery, there are competing priorities over who should have access to what could be the greatest scientific discovery and intellectual property of the decade. What co-discoverers Charpentier and Doudna both seem to agree on is that the aim of the work is to use Crispr-Cas9 as kind of medicine that can treat very serious diseases. That's why, perhaps, the biggest barrier to using Crispr-Cas9 in the clinic will be to develop a safe and efficient delivery to the precise cells and tissues that need the genetic therapy. Nobel Laureate and professor Craig Mello, who co-discovered the gene silencing technique known as RNAi, believes that the first treatments are likely to involve the genetic manipulation of stem cells in the laboratory, before transplanting back into the affected parts of the body. Delivery to cells within the context of the whole body, brain or other organs, is very difficult and inefficient. This is why CRISPR therapies will no doubt be limited for the foreseeable future to applications where stem cells can be modified one, or a few, at a time and then reintroduced after double checking that only the intended change was made, Professor Mello said [7]. The CRISPR craze, as the journal Science calls it, is showing no signs of fatigue. JOURNAL REFERENCES [1] Elitza Deltcheva, Krzysztof Chylinski,, Cynthia M. Sharma, Karine Gonzales, Yanjie Chao, Zaid A. Pirzada, Maria R. Eckert, J Vogel & Emmanuelle Charpentier: CRISPR RNA maturation by trans-encoded small RNA and host factor RNase III. Nature 31 March 2011. (doi:10.1038/nature09886). [2,3] Jinek, M. et al., A Programmable Dual-RNA Guided DNA Endonuclease in Adaptive Bacterial Immunity, Science 337, 816-821 (2012). [4] Mark D. Szczelkuna, Maria S. Tikhomirovab, Tomas Sinkunasd, Giedrius Gasiunasd, Tautvydas Karvelisd, Patrizia Pscherac, Virginijus Siksnysd and Ralf Seidel. Direct observation of R-loop formation by single RNA-guided Cas9 and Cascade effector complexes. PNAS, May 2014. [5] University of Bristol. How DNA is edited to correct genetic diseases. [6] Qi, L.S. et al., Repurposing CRISPR as an RNA-Guided Platform for Sequence-Specific Control of Gene Expression, Cell 152, 1173-1183 (2013). [7] Steve Connor. Scientific split the human genome breakthrough dividing former colleagues. The Independent. 25 April 2014. http://www.independent.co.uk/news/science/scientific-split--the-human-genome-breakthrough-dividing-former-colleagues-9300456.html. [Oct. 26, 2014]. [8] Elizabeth Pennisi. The CRISPR Craze. Science 23 August 2013: Vol. 341 no. 6148 pp. 833-836. (DOI: 10.1126/science.341.6148.833).