An important way that precancerous cells evade a checkpoint that normally stops their growth has been discovered by Salk Institute scientists. Their study, which also has implications for aging, was published in the journal Molecular Cell. Jan Karlseder was senior author; Anthony J. Cesare was lead author. The study can be found at this link. 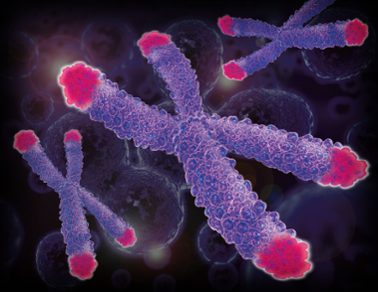 An important way that precancerous cells evade a checkpoint that normally stops their growth has been discovered by Salk Institute scientists. Their study, which also has implications for aging, was published in the journal Molecular Cell. Jan Karlseder was senior author; Anthony J. Cesare was lead author. The study can be found at this link. Mutations that inactivate the p53 oncogene/tumor suppressor gene allows these cells to keep dividing even when telomeres, the protective ends of chromosomes, have been eroded, the scientists found. If these cells get a second mutation that restores their telomeres, they can divide without limit, becoming "immortal" -- a hallmark of cancer. A connection between cancer and telomeres has long been known, but the precise molecular mechanism linking the two was unclear. It was also unclear whether telomere erosion by itself is enough to stop cells from dividing; the study found that p53's molecular pathway controls this process. Nearly all cancers involved a mutation in p53 itself or some other part of the pathway, Karlseder said.
Aging is also influenced by telomeres.
Cells that cease dividing due to telomere signaling enter senescence (deterioration), part of the normal aging process. When cellular senescence is prematurely triggered through telomere-disrupting mutations, it produces premature aging diseases. "The study adds substantially to our knowledge of the cellular aging process, so at some level it is relevant to all of us," said cancer researcher Roger Reddel of the University of Sydney in Australia. Reddel was the corresponding author in two previous papers by Cesare, when Cesare was a postdoctoral researcher in Reddel's lab in Sydney. Telomeres erode gradually as cells divide. When they reach what's called an "intermediate" state, they send a signal activating the DNA damage response, stopping further cell division. That's important to stopping cancer, because chromosomes that have lost their telomeres can fuse, triggering genetic instability that can cause cancer. The paper explains the precise nature of this signal and how it is enforced.   It was previously unclear whether telomere erosion itself was enough to halt cell division by invoking another checkpoint process; the research of Cesare and Karlseder shows that is not the case. Since p53-related mutations are involved in the great majority of cancers, the research underscores their importance, Karlseder said. One of the key findings is how cellular senescence is triggered in a way that doesn't cause a risk of cancer, Reddel said in an email. "We have known for a long time that senescence occurs when there is a DNA damage response at telomeres," Reddel said. "But this seemed like a very dangerous way to trigger senescence, because if a DNA damage response occurs anywhere else in the genome the cell tries to repair the damage, and repairing DNA damage at telomeres would result in the ends of different chromosomes fusing together which would result in genomic instability and an increased risk of cancer. Makoto Hayashi, Anthony Cesare and Jan Karlseder of the Salk Institute. Salk Institute "The authors of this paper have resolved this major paradox by discovering a key molecular difference between the DNA damage response at telomeres and anywhere else in the genome," Reddel said. "The outcome of this molecular difference is that the DNA damage response at telomeres does not result in inappropriate DNA repair, but instead instructs the cell to exit from the cell division cycle in an orderly way that preserves genomic integrity." Richard Cawthon, a University of Utah researcher on aging not involved in the study, said its science is "top-notch." "The significance is that it further, and strongly, supports the theory that telomere shortening, while raising the risk of various late age-of-onset diseases, is generally protective against cancer, and so is likely to have been selected for during evolution due to this cancer-protective effect," Cawthon said by email.