In June 2001, our CEO Chip Lindgren suddenly found out he was diagnosed with oligodendroglioma brain cancer. He was able to buy time with world leading surgeons that have over watched breakthroughs in cancer immunotherapy (immuno-oncology) and viral oncology research. Chip was one of the first to receive awake brain surgery at UCLA in 2001 with an excellent outcome.

In June 2001, our CEO Chip Lindgren suddenly found out he was diagnosed with oligodendroglioma brain cancer. He was able to buy time with world leading surgeons that have over watched breakthroughs in cancer immunotherapy (immuno-oncology) and viral oncology research. Chip was one of the first to receive awake brain surgery at UCLA in 2001 with an excellent outcome. Below he shares his experiences with how he learned he was diagnosed with cancer, his bout with its recurrence, and the steps he took to deal with it.

I was walking with my wife. We would do evening strolls in the neighborhood, and I felt like I cracked a tooth--the numbing sensation was in my cheek. It lasted for about ten seconds then went away. I thought it was weird, but chose to ignore it. The next day, I had the same sensation while at work. This was around May 2001. I thought I was having a stroke. I went to the ER. I was put on the table that was like a stroll board. There were 80-year-old women, 90-year-old men--and then there was me. It was 2001 and I was 31. The doctor says, Good news! You're not having a stroke. Bad news, there's a tumor and you have to go get it checked out immediately. So, that's how I came to find out. At that time, I had Faith (daughter), who was 16 months old and Sam (son) was 2 months old.

I found a brand new doctor from Duke and Stanford. He had all the right credentials, but I didn't feel comfortable with the doctor being so new. So, I went out to identify a surgeon in UCLA, Dr. Liau. Linda Liau. Her mother died of a brain tumor, and she had dedicated herself to that cause. When they were doing all the testing, normally you have speech in one center, they found I had speech in both hemispheres. So they recommended I have an awake surgery. So, I was like, What the heck is an awake surgery?! I was debating if I should go with the guy at UCSD or the doctor at UCLA. After they determined I needed awake surgery, I asked both of them, How many awake surgeries have you done? The UCSD doctor said You'd be my first and then I go to Dr. Liau, and asked her How many awake surgeries have you done? At that time, she had done about 70. So, I thought to myself, Do you want to be the first or do you want to be the 70th? I was the 70th.

The recovery was amazingly fast. I took two weeks off at the time after surgery. The second time cancer came back was not so much. Back in 2009, I had surgery again. It required rehabilitation. I was a little bit older.  As you get older, you don't bounce back as quickly. They said this type I had moved and grew slowly, and that they were going to monitor it. I would get tested periodically to see if it came back and it decided to come back in 2009. After the 2nd surgery, they said they could take it out just like they did before, but this time, I would need to go through chemo and radiation. It kind of fries you a little bit. It took a longer time to come back, unfortunately. I had my sister and my brother helping me out with the business at the time. They were able to hold the fort down while I went through rehab. It took months in the second recurrence.   To me, when I look at my son who was just a couple months old at the time when I had the first surgery, and I see him now, he's a freshman in high school, it's amazing to see how fast time goes and how far we've come.

My mother was diagnosed with cancer with a brain tumor as well. They were telling me the disease wasn't genetic. I'm the guy on the short end of the stick. I have 5 sisters and a brother, so there were 7 of us. When they told me it's not genetically related, I felt like they were kidding me. But back then, they only had x-rays in the 70s. Now we have MRIs, CAT scans, PET scans; I did the awake surgery, so the precision is night and day compared to my mother's case. Everyone has their own story. In June 2001, CEO Chip Lindgren suddenly found out he was diagnosed with oligodendroglioma brain cancer. His son Samuel was 2 months old and his daughter Faith was 16 months old. Chip was one of first to receive awake brain surgery at UCLA in 2001 and to have an excellent outcome. A reoccurrence of cancer appeared in 2009, where he had a challenging time undergoing surgery again, but with radiation, chemotherapy, and rehabilitation. It was, as he described, a longer road back to recovery. With the support of his family in these trials, he was able to recover well, with the business still intact. He shares that these experiences taught him to be brave, be grateful, and to persevere and tells the AG team that "Life is unpredictable, with no straight path to success. You must pick yourself up, and as a business owner, you must earn it each day." Chip's Neurosurgeon, Dr. Linda M. Liau, was honored at the UCLA Neurosurgery Visionary Ball 2016 with the Medical Visionary Award. She is Professor & Vice Chair of the UCLA Department of Neurosurgery at the Geffen School of Medicine. She is also the Director of the UCLA Brain Tumor Program. 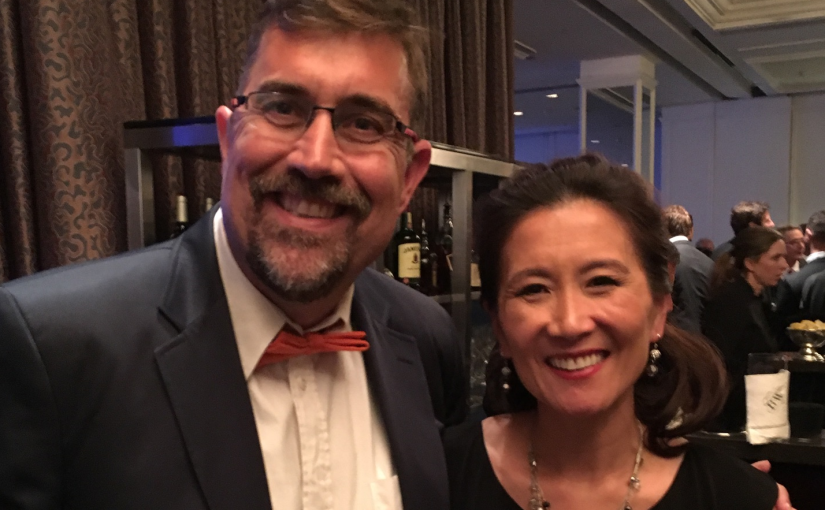 Dr. Liau holds a B.S and B.A from Brown University and received her medical degree from Stanford University. She completed her residency in neurosurgery at UCLA. She received her doctoral degree in Neuroscience at UCLA and her M.B.A from the UCLA Anderson School of Management. Dr. Liau's clinical expertise is in intra-operative functional brain mapping and uses intra-operative imaging for resection of brain tumors like gliomas, meningiomas, and metastatic tumors. Her research is focused on the molecular biology of brain tumors, gene therapy, immunotherapy, and brain cancer vaccines. Dr. Liau and her research team have developed the very first personalized brain cancer vaccine in the United States. The vaccine is made by isolating a specific cell in the patient and combing it with the patients own tumor tissue.