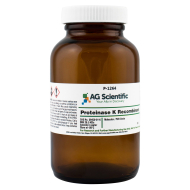 Proteinase K degrades almost every protein and inactivates rapidly enzymatic activities under a broad range of conditions (SDS, Urea, pH 4 -12). The enzyme is used for the isolation of clean and native genomic DNA and RNA in order to guarantee PCR based detection.

Proteinase K degrades almost every protein and inactivates enzymatic activities under a broad range of conditions (SDS, Urea, pH 4 -12). The enzyme is used for the isolation of clean and native genomic DNA and RNA in order to guarantee PCR based detection. Recently, the protease has been used for the detection of BSE (bovine spongiform encephalopathy) proteins which are uniquely resistant to proteolytic degradation. BSE is caused by a misfolded protein, known as a prion. Read further to explore the applications of proteinase K in prion-related diseases.

What are Prion diseases?

Excerpt from Manganese Upregulates Cellular Prion Protein and Contributes to Altered Stabilization and Proteolysis: Relevance to Role of Metals in Pathogenesis of Prion Disease (Published by Oxford Journals on Toxicological Sciences): <nbsp;> "Prion diseases are fatal neurodegenerative diseases resulting from misfolding of normal cellular prion (PrPC) into an abnormal form of scrapie prion (PrPSc). The cellular mechanisms underlying the misfolding of PrPC are not well understood. Since cellular prion proteins harbor divalent metal-binding sites in the N-terminal region, we examined the effect of manganese on PrPC processing in in vitro models of prion disease. Exposure to manganese significantly increased PrPC levels both in cytosolic and in membrane-rich fractions in a time-dependent manner. Limited proteolysis studies with proteinase-K further supported that manganese increases the stability of PrPC. Collectively, our results demonstrate for the first time that divalent metal manganese can alter the stability of prion proteins and suggest that manganese-induced stabilization of prion protein may play a role in prion protein misfolding and prion disease pathogenesis" (Choi, C. et al, 2010). <nbsp;> Prion diseases are caused by the misfolding of the endogenously expressed PrP protein, and the most widely accepted model of prion multiplication is that abnormally folded PrP recruits and converts the host PrP into new abnormal forms. Historically, abnormal PrP was operationally defined as insoluble and resistant to protease digestion and was subsequently termed PrPres. <nbsp;> Although normal PrP protein is soluble in detergents and sensitive to proteinase K (PK) digestion, part of PrP in infected tissues is PK-resistant and recovered in the pellets of centrifuged samples. These large PrPres aggregates are infectious, but it is unclear whether infectivity is entirely congruent with these species or whether they are the more efficient species to promote infection. Efficient transmission in the absence of detectable typical PrPres has been observed in some models of prion diseases.

Excerpt from: Use of proteinase K nonspecific digestion for selective and comprehensive identification of interpeptide cross-links: Application to prion proteins (Published by Molecular & Cellular Proteomics): "Chemical cross-linking combined with mass spectrometry is a rapidly developing technique for structural proteomics. Cross-linked proteins are usually digested with trypsin to generate cross-linked peptides, which are then analyzed by mass spectrometry. In this paper, we examine a nonspecific protease, proteinase K, as an alternative to trypsin for cross-linking studies. Initial tests on a model peptide that was digested by proteinase K resulted in a family of related cross-linked peptides, all of which contained the same cross-linking sites, thus providing additional verification of the cross-linking results, as was previously noted for other post-translational modification studies. Using this new method, we were able to detect over 60 interpeptide cross-links in the native PrPC and PrPβ prion protein. The set of cross-links for the native form was used as distance constraints in developing a model of the native prion protein structure, which includes the 90-124-amino acid N-terminal portion of the protein. Several cross-links were unique to each form of the prion protein, including a Lys185-Lys220 cross-link, which is unique to the PrPβ and thus may be indicative of the conformational change involved in the formation of prion protein oligomers" (Petrotchenko, Evgeniy V et al, 2012).