Solid tumors are complex â€œorgansâ€ of cancer cells and a heterogeneous population of hematopoietic cells, mesenchymal cells, and endothelial cells. The cancer stem cell model proposes that tumor growth and progression is driven by rare populations of cancer stem cells 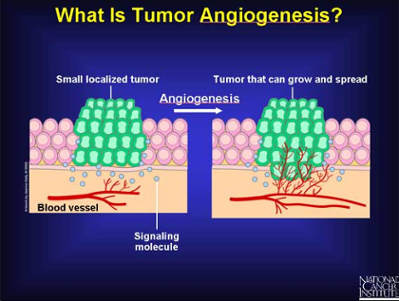 Solid tumors are complex organs of cancer cells and a heterogeneous population of hematopoietic cells, mesenchymal cells, and endothelial cells. The cancer stem cell model proposes that tumor growth and progression is driven by rare populations of cancer stem cells; however, nontumor-forming stem and progenitor cells are also present within the tumor microenvironment. These adult stem cells do not form tumors when injected into experimental animals, but they may augment tumor growth through juxtacrine and paracrine regulation of tumor cells and by contributing to neovascularization. Thus, cancer cells may actively co-opt nontumor-forming stem cells distally from the bone marrow or proximally from nearby tissue and subvert their abilities to differentiate and maintain tissue growth, repair, and angiogenesis. This review will cover the roles of nontumor-forming vascular stem cells in tumor growth and angiogenesis. MESENCHYMAL PROGENITOR CELLS MPC and their progeny are present in most if not all postnatal organs. Their major function is to maintain and regenerate connective tissues and to replenish damaged tissue following injury or inflammation. MPC differentiation is dependent on the local production of cytokines/growth factors resulting in tissue specificity. Therefore, MPC may differentiate into the type of tissue they engraft. Because paracrine/juxtacrine interactions between MPC and neighboring cells may be critical for controlling the rate and timing of differentiation, it is predicted that crosstalk between mutant cancer cells and resident MPC could affect their normal differentiation patterns. A good example is the adipogenic differentiation of MPC in subcutaneous tumor sites and osteoblastic differentiation at sites of lung metastasis. Similar to HPC, MPC may be hierarchically organized into heterogeneous clonal variants with different proliferative and differentiation abilities. Although it has not been investigated, these variants may function differently depending on tumor stage or type.
MPC may form a large proportion of the reactive stroma in solid tumors and share properties with carcinoma-activated fibroblasts, which express alpha smooth muscle actin (Î±-SMA), however, it is difficult to distinguish bona fide MPC from fibroblasts due to overlapping expression of several surface markers. Recently, Hoechst dye efflux was used to isolate and culture expand MPC from prostate carcinoma. One unanswered question is whether bone marrow is the primary source of MPC in tumors or if there are alternative sites. Factors that typically stimulate angiogenesis including hypoxia, ischemia, and proinflammatory cytokines also stimulate MPC mobilization; thus, intravenously delivered MPC display tropism to sites of injury and engrafted tumors. Notably, marrow-derived PDGF-β progenitor cells were shown to localize in a perivascular position raising the possibility that circulating MPC or MPC-like cells seek out blood vessels in the tissue they engraft. On the other hand, tumor-associated MPC may be co-opted from nearby tissue (e.g., adipose tissue) where they reside in a perivascular niche. For example, Crisan showed that pericytes and MPC are indistinguishable sharing common features such as multipotency. Thus, MPC in tumors are conveniently positioned to form pericytes, which are major structural and paracrine cellular components of new blood vessels.
The effect of MPC on primary tumor growth is equivocal with studies showing enhancement , inhibition, or no effect when coinjected with different tumor cell lines. A recent study showed that neutralization of LL-37, a proinflammatory peptide, reduced engraftment of MPC in human ovarian xenografts resulting in tumor growth inhibition. On the other hand, due to their tumor-homing abilities, MPC may be exploited as vectors for drug delivery. loaded MPC with interferon beta (IFN-β), injected them intravenously, and found suppression of tumor growth and metastasis and prolonged survival in mice. Similar to their effect on primary tumor growth, the role of MPC in metastasis is conflicting. Karnoub reported that MPC increased metastasis when admixed with various tumor cell lines. Other studies show that intravenous (i.v.) injection of MPC has either no effect on 4T1 breast cancer metastasis or reduces metastasis when MPC are transduced withÂ TRAIL. Some of these discrepancies are likely due to the different routes of MPC injection (coinjection with tumor cells vs. i.v. injection).
The tumor-promoting properties of MPC might be related to angiogenesis stimulation. MPC differentiate to form pericytes and are a major source of VEGF secretion. Although controversial, transdifferentiation of MPC to directly form endothelium has been reported. Similar to their role played during wound healing, tumor-associated MPC may secrete proinflammatory chemokines, which recruit proangiogenic hematopoietic cells (e.g., monocytes and neutrophils). On the other hand, one study suggested that MPC dose-dependently inhibited angiogenesis due to reactive oxygen species generation, which led to endothelial apoptosis and vessel regression. Together, MPC and their progeny may have both protumor and antitumor properties that are tumor-type dependent or related to the different routes of MPC injection. Furthermore, MPC might be exploited as drug delivery vehicles due to their tumor homing properties. Although laboratory mice are good models for studying the role of MPC in tumors, their function in clinical cancers has not been investigated in detail.
Sources: Juan M. Melero-Martin, Andrew C. Dudley