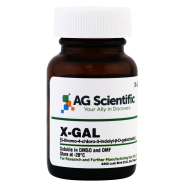 X-gal (also abbreviated BCIG for 5-bromo-4-chloro-indolyl-Î²-D-galactopyranoside) is an organic compound consisting of galactose linked to a substituted indole. The compound was synthesized by Jerome Horwitz and collaborators in Detroit, MI, in 1964. The formal chemical name is often shortened to less accurate but also less cumbersome phrases such as bromochloroindoxyl galactoside. 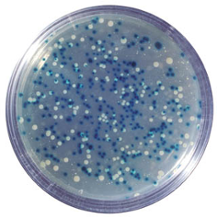 X-gal (also abbreviated BCIG for 5-bromo-4-chloro-indolyl-β-D-galactopyranoside) is an organic compound consisting of galactose linked to a substituted indole. The compound was synthesized by Jerome Horwitz and collaborators in Detroit, MI, in 1964. The formal chemical name is often shortened to less accurate but also less cumbersome phrases such as bromochloroindoxyl galactoside. The X from indoxyl may well be the source of the X in the X-gal contraction. X-gal is much used in molecular biology to test for the presence of an enzyme, β-galactosidase. It is also used to detect activity of this enzyme in histochemistry and bacteriology. X-gal is one of many indoxyl glycosides and esters that yield insoluble blue compounds similar to indigo as a result of enzyme-catalyzed hydrolysis. X-gal is an analog of lactose, and therefore may be hydrolyzed by the β-galactosidase enzyme which cleaves the β-glycosidic bond in D-lactose. X-gal, when cleaved by β-galactosidase, yields galactose and 5-bromo-4-chloro-3-hydroxyindole. The latter then spontaneously dimerizes and is oxidized into 5,5'-dibromo-4,4'-dichloro-indigo, an intensely blue product which is insoluble. X-gal itself is colorless, the presence of blue-colored product therefore may be used as a test for the presence of an active β-galactosidase. This easy identification of an active enzyme allows the gene for β-galactosidase (the lacZ gene) to be used as a reporter gene in various applications.

In gene cloning, X-gal is used as a visual indication of whether a cell expresses a functional β-galactosidase enzyme in a technique called blue/white screening. This method of screening is a convenient way of distinguishing a successful cloning product from other unsuccessful ones.

The blue/white screening method relies on the principle of Î±-complementation of the β-galactosidase gene, where a fragment of the lacZ gene (lacZÎ±) in the plasmid can complement another mutant lacZ gene (lacZÎ”M15) in the cell. Both genes by themselves produce non-functional peptides, however, when expressed together, as when a plasmid containing lacZÎ± is transformed into alacZÎ”M15 cells, they form a functional β-galactosidase. The presence of an active Î²-galactosidase may be detected when cells are grown in plates containing X-gal, the blue-colored product precipitated within cells resulted in the characteristic blue colonies. However, the multiple cloning site, where a gene of interest may be ligated into the plasmid vector, is located within the lacZÎ± gene. Successful ligation therefore disrupts the lacZÎ± gene, Î±-complementation is therefore also disrupted and no functional Î²-galactosidase can form, resulting in white colonies. Cells containing successfully ligated insert can then be easily identified by its white coloration from the unsuccessful blue ones. Example of cloning vectors used for this test are pUC19, pBluescript, pGem-T Vectors, and it also requires the use of specific E. coli host strains such as DH5Î± which carries the mutant lacZÎ”M15 gene. Protein-protein Interactions In two-hybrid analysis, β-galactosidase may be used as a reporter to identify proteins that interact with each other. In this method, genome libraries may be screened for protein interaction using yeast or bacterial system. Where there is a successful interaction between proteins being screened, it will result to the binding of an activation domain to a promoter. If the promoter is linked to a lacZ gene, the production of β-galactosidase, which results in the formation of blue-pigmented colonies in the presence of X-gal, will therefore indicate a successful interaction between proteins. This technique may be limited to screening libraries of size of less than around 106. The successful cleavage of X-gal also creates a noticeably foul odor due to the volatilization of indole. Water testing In addition to use in molecular biology, X-Gal is used to determine E. coli and coliform content in drinking water samples.   Sources: Horwitz JP, Kiernan JA, Joung J, Ramm E