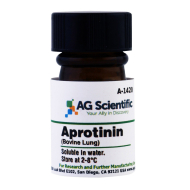 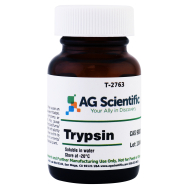 A.G. Scientific is using this week to focus on what is considered to be an odd group of proteins in biology, namely a family of catalysts called Serine Proteases, also sometimes referred to as serpins, are each integral to the process of regulating enzymes. Until an enzyme becomes active, they idle patiently in surrounding glands and in specialized cells as a pre-cursor molecule, referred to as a zymogen, also sometimes called a proenzyme. These pre-cursor zymogen molecules become turned ON when Serine Proteases attack a single, specific peptide bond within the zymogen. The mechanism itself is highly precise, however, the process of activating one is irreversible and will occur once only in the entire life of that enzyme.

A.G. Scientific is using this week to focus on what is considered to be an odd group of proteins in biology, namely a family of catalysts called Serine Proteases, also sometimes referred to as serpins, are each integral to the process of regulating enzymes. Until an enzyme becomes active, they idle patiently in surrounding glands and in specialized cells as a pre-cursor molecule, referred to as a zymogen, also sometimes called a proenzyme. These pre-cursor zymogen molecules become turned ON when Serine Proteases attack a single, specific peptide bond within the zymogen. The mechanism itself is highly precise, however, the process of activating one is irreversible and will occur once only in the entire life of that enzyme. Retired enzymes that have already served their purpose are simply free to the wind like a plastic bag in the breeze. Besides for their short and incredibly productive life, it is also part of an enzyme's biochemical destiny to be degraded in order for their amino acids to be recycled back into new proteins. Specific Serine Proteases are the only way to stop the proteolysis mechanism from washing bits of amino acids back to the shoreline of your cells. Many Enzymes Are Activated By Proteolysis Once activated, many proteolytic enzymesÂ will vary in their degree of activity and specificity depending on their physiological role. It is for this reason, according to some scientific reports, that a vegetarian diet is healthier than eating meat because it requires fewer enzymes to process and digest your food. Using fewer enzymes means leaving a bigger supply available for you to use later on through life. A medical condition known as an 'enzyme deficiency' is a serious, sometimes fatal condition, that can later develop into heart disease, obesity, or joint pain, among a list of other conditions. Enzymes are potent and powerful molecules, and when activated is best to have efficient regulation, since many enzymes have a half-life of only a few months and require a concncurrent activation of other enzymes [Biochemistry]. The digestion of a meal in the duodenum is one such case of needing to activate multiple zymogens at a time. As the ring leader of all the pancreatic enzymes, trypsin is able to coordinate the activation of other zymogens, namelyproelastase, chymotrypsinogen, prolipase, and procarboxypeptidase. Yet, even though trypsin is seen as the master switch, it leaves from the pancreas not as an enzyme, but as it's zymogen pre-cursor molecule trypsinogen only to be converted over to its active state later by another enzyme enteropeptidase, as it enters the duodenum of the lower intestine.

Another marvel of physiology is the body's ability to clot an open wound. Having the means to seal a leaky vein and stop the blood flow out an open wound, saves many countless number of lives everyday, and can only happen after zymogen has gone through many different transition states in order to arrive at its final, characteristic shape. Many of these clotting factors are actually Serine Proteases that work by activating a catalyst, which then spurs the activation of the next precursor in the chain of events leading up to the clot formation. The process itself is long and complex, most of these zymogens will not require any ATP energy input to evolve, but in the final scene of their life, their inactive precursor Fibrinogen (a soluble molecule in plasma) is triggered by Thrombin to become the long, insoluble fiberous thread called Fibrin. When Fibrin locks hands with other Fibrin molecules, they weave together a quilt that covers over the wound, allowing it time to heal. The clots are not, of course, permanent installations and will eventually dissipate when the damaged areas recover. Elastatinal, as mentioned already, is another essential enzyme in clotting that very specifically ensures that ONLY the damaged tissue is degraded once that effected tissue has completely recovered. In the presence of high concentrations of elastatinal, such as when a chronic, persistent injury exists, these inhibitors of clot dismantling will over-regulate and start to degrade the surrounding healthy tissue, and can sometimes lead to the festering of old wounds or to reinfection if it persists long enough.

Many other proteases have subsequently been found to contain properties similar to thrombins blood clotting abilities discovered to also belong to this clan of enzyme facilitaters. Some, such as elastatinal and trypsin, both have homologs, such as chymotrypsin, which themselves all have a family of co-factors that participate in blood clotting and the healthy functioning of cells. Similarly, like other serine protease inhibitors, any deviation from normal serum levels - either in excess or be it deficient - of the inhibitor, leads to other more serious clinical conditions. The consequence of having excess elastase in circulation is the destruction of the alveolar walls in the lungs as it digests the elastic fibers and other connective tissues in the lungs, resulting in a clinical condition (often genetically-linked, but accelerated in many cases from inhaling tobacco smoke) known as emphysema, also known as destructive lung disease. That's at least one reason why having an enzyme inhibitor in your preparations, such as elastatinol, can greatly enhance the shelf-life of your enzyme solution from 6 months on up to a year, sometimes longer depending on your enzyme of focus. Biochemistry of Serine Proteases Serine Proteases have a range of catalytic strategies they use to facilitate an otherwise impossible reaction. In either case, a reactive nucleophile is generated, powerful enough to cleave the peptide bonds within the active site. Some will use a side-chain fitted like a key to a hole. Others will easily react with a molecule of water, a hydrolysis reaction so powerful it can directly separate the reactive peptide carbonyl group. DNA Polymerase I is another example of a highly specific protease, serves to add nucleotides to a complimentary strand of DNA being constructed. DNA polymerase I is amazingly accurate, the odds that it will insert the wrong nucleotide into a new DNA strip are less than one in a million [biochemistry]. Protease Inhibitors - A Drug Maker's Choice As we see, the actions by proteases have profound effects on your body's biology. On the one hand, they are master's of destiny, on the other they are victims of a pernicious indifference, blindly accepting their fate to become a great and magnificient blossom in an otherwise dark chamber. For example, the drug Catopril is a protease inhibitor of ACE (angiotensin-converting enzyme) used to regulate blood pressure. Crixivan is another inhibitor used to down-regulate the HIV protease, and is used in treatment of AIDS. For protease inhibitor's to work effectively as a drug without creating unwanted side-effects, they must be specific for one enzyme only without inhibiting other proteins of the body. Since all enzymes are proteins (not all proteins are enzymes), they will acquire full reactivity only after the spontaneous re-folding of their multi-dimensional structure formed by their own, unique blend of amino acids. This ability to produce new proteins and activate enzymes when needed, is a vital on-board life support system necessary for survival. In the case of serine proteases, best portrayed by chymotrypsin, they will always continue to facilitate a difficult reaction that would otherwise move on at a glacial rate at neutral pH without the presence of a catalyst. [Author's Addendum] We discuss Aprotinin's properties as a competitive, reversable inhibitor of both proteolytic and esterolytic activity. When used in cell cultures, it also extends the life of the cells and prevents the proteolytic mechanism from damaging the culture. Other topics discussed are the potential for aprotinin to reduce blood loss during transfusion as well as applications for diabetes. Pop Quiz Q: If, say, a drug company has decided to use recombinant DNA technology to prepare a modified version of the pancreatic trypsin inhibitor, alpha1-antitrypsin as a treatment for emphysema, one that is more resistant to oxidation than other naturally occurring inhibitors, which amino acid do you think they would have to replace in order to improve its life cycle function? A: Most likely, they would want to replace the single amino acid Methionine with Leucine because it adds the same volume and degree of hydrophobicity as Methionine, but is more resistant to oxidation, and holds up better over time. Alpha1-antitrypsin is a protease inhibitor released by white blood cells, a protein which can block the activation of elastase, which protects the alveolar walls in the lungs from digesting the elastic fibers and other connective tissue between cells. SOURCES / REFERENCES Jeremy M Berg, John L Tymoczko, and Lubert Stryer. Biochemistry. W H Freedman, 5th edition, 2002. Pages 229-239. Silverman GA, Whisstock JC, Bottomley SP, Huntington JA, Kaiserman D, Luke CJ, Pak SC, Reichhart JM, Bird PI. Serpins Flex Their Muscle I: Putting the Clamps on Proteolysis in Diverse Biological Systems. Journal of Biology and Chemistry (May 2010), 285 (32): 24299-305. doi:10.1074/jbc.R110.112771. Thanks to Saunders College Publishing and SlideShare for use of their images, and my biochemistry textbook for the quiz question. ***The author declares no bias in the reporting. This subject matter is intended for Medical and Science researchers and students as a literary guide and resource, vetted by researchers, for researchers. A.G. Scientific, Inc. is an ISO certificated facility, and serves to advance scientific discovery in the medical and biomedical fields.