What you need to know about 17 FAQs on Anisomycin

Anisomycin, also known as flagecidin is an antibiotic produced by Streptomyces griseolus. Anisomycin interferes with protein and DNA synthesis by inhibiting peptidyl transferase or the 80S ribosome system. Partial inhibition of DNA synthesis occurs at anisomycin concentrations that effect 95% inhibition of protein synthesis. 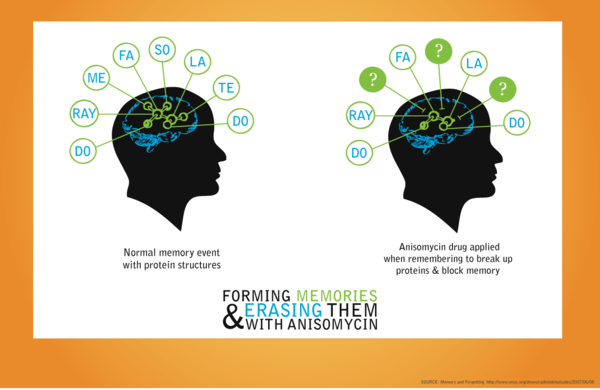 Anisomycin is a pyrrolidine antibiotic, that acts as an anti-fungal antibiotic which inhibits Protein Synthesis. Recently, many scientists are studying about relationship between anisomycin and memory. The anisomycin prevented the brain from re-forming memory connections after breaking them during the retrieval process. DESCRIPTION: Anisomycin, also known as flagecidin is an antibiotic produced by Streptomyces griseolus. Anisomycin interferes with protein and DNA synthesis by inhibiting peptidyl transferase or the 80S ribosome system. Partial inhibition of DNA synthesis occurs at anisomycin concentrations that effect 95% inhibition of protein synthesis. Anisomycin can activate stress-activated protein kinases, MAP kinase and other signal transduction pathways. 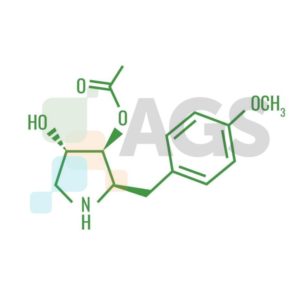 IUPAC name: (2R, 3S, 4S)-4-hydroxy-2-(4- methoxybenzyl)-pyrrolidin- 3-yl acetate Other name: Flagecidin Molecular formula: C14H19NO4 Molar mass: 265.31 g/mol Melting point: 139-143°C Q: Why is anisomycin being focused on since its discovery in 1954? A: Because it has a lot of activities which prove it as potential candidate for medical usage. Anisomycin has been found to generate many interesting biological responses including; anti-fungal activity, protein synthesis inhibition, and anti-tumor activity in the nM region. More recently anisomycin has been used as a chemical stimulant of the stress activated protein kinase (SAPK) pathways and we have investigated the structure activity relationship (SAR) of anisomycin in this role. Q: Is anisomycin used clinically for anti-cancer? A: No. Anisomycin has not been used clinically; the protein synthesis inhibitor homoharringtonine is under development as a new therapeutic agent. Although this drug has activity as a single agent in hematologic malignancies, it did not reduce the size of established solid tumors in clinical studies. The report might provide an explanation for the lack of benefit of homoharringtonine in solid tumors. From this paper, it showed that inhibiting protein synthesis did not reduce the viability of malignant cells adherent to their ECM, but induced apoptosis after the cells detached. Thus, this study suggests that protein synthesis inhibitors could be of clinical benefit for the treatment of solid tumors when used to induce apoptosis of circulating tumor cells. Q: Can I dissolve the crystalline solid in aqueous buffers directly? A: Yes. Organic solvent-free aqueous solutions of anisomycin can be prepared by directly dissolving the crystalline solid in aqueous buffers. Q: Why is understanding of interaction between anisomycin and SAPK pathways important? A: The SAPK pathways play an important role in a number of diseases including Alzheimer's, and cancer and hence an understanding of their regulation is crucial.Â So if the role of anisomycin to SAPK pathway is revealed, we can expect it to be used for medical purpose. Q: What is the solubility of anisomycin in PBS, pH7.2? A: It approximately 0.5mg/ml. Q: Can I store the aqueous solution for several days? A: No. We do not recommend storing the aqueous solution for more than one day. Q: What is the solubility of anisomycin? A: It depends on the solvent which you use. It is soluble at 12 mg/mL in ethanol, 50 mg/mL in DMSO, 20 mg/mL in methanol and moderately soluble 2 mg/mL in H2O. For higher solubility in aqueous solution (100 mg/mL), the pH should be lowered to 5.0. It is also soluble in lower alcohols, esters, ketones, and chloroform; slightly soluble in benzene, toluene and hexane. Q: How can I store anisomycin? A: It should be stable for at least two years. Store the product desiccated at 2-8 °C. The product is stable for 4 years under these conditions. But, DMSO solutions are stable for at least one month at 2-8 °C. Q: What is the stability of anisomycin? A: Crystalline anisomycin is extremely stable. Aqueous solutions of anisomycin are most stable at neutral pH at room temperature. Slightly acidic solutions lose activity at relatively slow rates, while alkaline solutions lose activity more rapidly. Q: How can I get HeLa nuclear extract? A: Basically saying, it was prepared from a cell culture of the HeLa human epithelial carcinoma cell line that was treated with anisomycin. Cells were cultured in medium supplemented with 5 µM Anisomycin for 1 hour at 37°C immediately prior to harvesting. Anisomycin is also a potent inhibitor of the p38/JNK MAPK pathway. So it is recommended for analysis of protein synthesis and the p38/JNK MAPK pathway. Q: Can it be used as any kind of activator? A: Yes. It is well known as protein synthesis inhibitor, but also has been widely used as an extremely potent activator of kinase cascades in mammalian cells, especially the stress-activated protein kinase (SAPK2/p38MAPK), kinase subtypes and p46/54JNK. 6-13 Q: Which factors make a synergic effect with anisomycin? A: Synergizes with growth factors and phorbol esters, anisomycin superinduce c-fos and c-jun by a number mechanisms, one of which is its ability to act as a potent signaling agonist, producing strong, prolonged activation of the same nuclear responses as epidermal growth factor or tetradecanoyl phorbol acetate. Q: Does anisomycin interact with insulin receptor? A: Anisomycin stimulated serine phosphorylation of IRS-1 and IRS-2, reduced their ability to interact with the insulin receptor and by that blocked the insulin-induced tyrosine phosphorylation of IRS proteins. Q: Depending on the concentration of anisomycin, what effects can it make in WB-F344 cells? A: A high concentration (10 ug ml-1) of anisomycin is maximally effective as a Gap-junctional intercellular communication (GJIC) inhibitor in WB-F344 cells. It is thought that anisomycin might also act as a translational inhibitor at such concentrations. A previous study has shown that relatively low concentrations of anisomycin (around 25-50 ng ml-1; so-called sub-inhibitory levels) can selectively activate the p38 MAP kinase without inhibiting protein synthesis. In some study, however, even a lower concentration of anisomycin (10 ng ml-1) appeared to have an ability to inhibit protein synthesis, but this concentration could not activate p38 MAP kinase. This discrepancy might be due to the different cell lines used in the studies. Q: What is the top interacting gene to anisomycin? A: 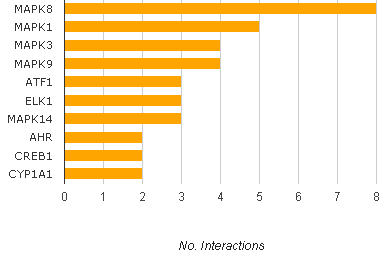 Q: What is the relationship between Cx43 and anisomycin? A: There is a study indicating that the anisomycin-induced activation of MAP kinase actually enhanced phosphorylation of Cx43, although it reduced the total amount of Cx43 protein as well as those of P1 and P2. This might indicate the possibility of increased phosphorylation per Cx43 molecule, although this conclusion needs further study, including the identification of phosphorylated sites. It has been suggested that the degradation of Cx43 depends on increased phosphorylation level of Cx43. Thus, our interpretation of the present result is that MAP-kinase-activated Cx43 phosphorylation might promote the degradation of Cx43. Q: If protein synthesis inhibitors including anisomycin were injected directly into the brain, what happened next? A: Direct brain injections of protein synthesis inhibitors produce amnesia for many tasks. Findings like these have led to the conclusion that de novo protein synthesis initiated by an experience is an important component of memories formed for that experience. From the some study, infusions of anisomycin into the hippocampus resulted in amnesia 48 h later. These findings are consistent with those of many prior studies involving injections of protein synthesis inhibitors into the hippocampus, as well as into other brain areas such as the amygdala, and prefrontal cortex. However, other consequences of protein synthesis inhibition may also be important for causing amnesia, including abnormal neurophysiological activity, gene superinduction, and apoptosis. Sources: