Home Blog Cancer Treated by Purifying Proteins
Back to List

Protein purification is a series of processes intended to isolate a single type of protein from a complex mixture. Protein purification is vital for the characterization of the function, structure and interactions of the protein of interest. The starting material is usually a biological tissue or a microbial culture. 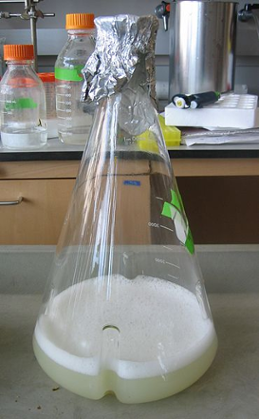 Protein purification is a series of processes intended to isolate a single type of protein from a complex mixture. Protein purification is vital for the characterization of the function, structure and interactions of the protein of interest. The starting material is usually a biological tissue or a microbial culture. The various steps in the purification process may free the protein from a matrix that confines it, separate the protein and non-protein parts of the mixture, and finally separate the desired protein from all other proteins. Separation of one protein from all others is typically the most laborious aspect of protein purification. Separation steps may exploit differences in (for example) protein size, physico-chemical properties, binding affinity and biological activity. PURPOSE Purification may be preparative or analytical. Preparative purifications aim to produce a relatively large quantity of purified proteins for subsequent use. Examples include the preparation of commercial products such as enzymes (e.g. lactase), nutritional proteins (e.g. soy protein isolate), and certain biopharmaceuticals (e.g. insulin). Analytical purification produces a relatively small amount of a protein for a variety of research or analytical purposes, including identification, quantification, and studies of the protein's structure, post-translational modifications and function. Pepsin and urease were the first proteins purified to the point that they could be crystallized. STRATEGIES Choice of a starting material is key to the design of a purification process. In a plant or animal, a particular protein usually isn't distributed homogeneously throughout the body; different organs or tissues have higher or lower concentrations of the protein. Use of only the tissues or organs with the highest concentration decreases the volumes needed to produce a given amount of purified protein. If the protein is present in low abundance, or if it has a high value, scientists may use recombinant DNA technology to develop cells that will produce large quantities of the desired protein (this is known as an expression system). Recombinant expression allows the protein to be tagged, e.g. by a His-tag, to facilitate purification, which means that the purification can be done in fewer steps. In addition, recombinant expression usually starts with a higher fraction of the desired protein than is present in a natural source. An analytical purification generally utilizes three properties to separate proteins. First, proteins may be purified according to their isoelectric points by running them through a pH graded gel or an ion exchange column. Second, proteins can be separated according to their size or molecular weight via size exclusion chromatography or by SDS-PAGE (sodium dodecyl sulfate-polyacrylamide gel electrophoresis) analysis. Proteins are often purified by using 2D-PAGE and are then analysed by peptide mass fingerprinting to establish the protein identity. This is very useful for scientific purposes and the detection limits for protein are nowadays very low and nanogram amounts of protein are sufficient for their analysis. Thirdly, proteins may be separated by polarity/hydrophobicity via high performance liquid chromatography or reversed-phase chromatography. It is reported that a mouse monoclonal antibody, 703D4, detects lung cancer 2 years earlier than routine chest x-ray or cytomorphology. The 703D4 antigen was then purified to elucidate its role in early lung cancer biology, using Western blot detection after SDS-polyacrylamide gel electrophoresis. Purification steps included anion exchange chromatography, preparative isoelectric focusing, polymer-based C

terminus was blocked, so CNBr digestion was used to generate internal peptides. Three sequences, including one across a site of alternate exon splicing, all identified a single protein, heterogeneous nuclear ribonucleoprotein-A2 (hnRNP-A2). A minor co-purifying immunoreactive protein resolved at the final C