Why Caspases are the executioners of apoptosis?

Home Blog Why Caspases are the executioners of apoptosis?
Back to List

Apoptosis, or cell suicide, is a form of cell death that is morphologically and biochemically distinct from necrosis. Although the concept of apoptosis was introduced 43 years ago (Kerr et al 1972), the mechanisms of how apoptosis is initiated and executed remained unclear until recently.

Apoptosis, or cell suicide, is a form of cell death that is morphologically and biochemically distinct from necrosis. Although the concept of apoptosis was introduced 43 years ago (Kerr et al 1972), the mechanisms of how apoptosis is initiated and executed remained unclear until recently. During the past five years,tremendous progress has been made in understanding apoptosis as a result of molecular identification of the key components of this intracellular suicide program(reviewed by Ellis et al 1991, Steller 1995, Nagata 1997). The core of this cell suicide program is evolutionarily conserved from worm to human. It consists of three major components: the Bcl-2 family proteins; the caspases, which belong to a family of cysteine proteases that cleaves after aspartic acid residues; and the Apaf-1/CED-4 protein that relays the signals integrated by Bcl-2 family proteins to caspase (Adams&Cory 1998). Biochemical activation of these key components of the cell death program is responsible for the morphological changes observed in apoptosis, including mitochondrial damage, nuclear membrane breakdown, DNA fragmentation, chromatin condensation, and the formation of apoptotic bodies (Thornberry & Lazebnik 1998). 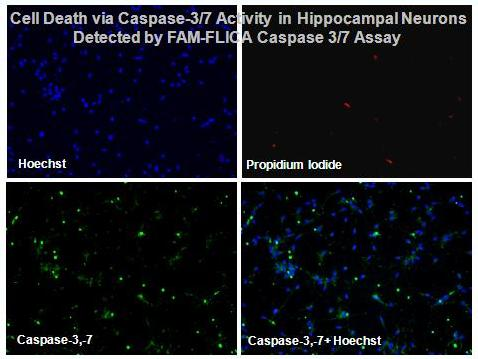 Caspases, or cysteine-aspartic proteases or cysteine-dependent aspartate-directed proteases are a family of cysteine proteases that play essential roles in apoptosis (programmed cell death), necrosis, and inflammation. Caspases are essential in cells for apoptosis, or programmed cell death, in development and most other stages of adult life, and have been termed "executioner" proteins for their roles in the cell. Some caspases are also required in the immune system for the maturation of lymphocytes. Failure of apoptosis is one of the main contributions to tumor development andautoimmune diseases; this, coupled with the unwanted apoptosis that occurs with ischemia or Alzheimer's disease, has stimulated interest in caspases as potential therapeutic targets since they were discovered in the mid-1990s. There are two types of caspases: initiator caspases and effector caspases. Initiator caspases (e.g. caspase-8, caspase-9) cleave inactive pro-forms of effector caspases, thereby activating them; effector caspases (e.g. caspases-3, caspase-7) in turn cleave other protein substrates within the cell resulting in the apoptotic process. The initiation of this cascade reaction is regulated by caspase inhibitors. Twelve caspases have so far been identified in humans. The caspase cascade can be activated by Granzyme B released by cytotoxic T lymphocytes, which is known to activate caspase-3 and -7; death receptors (like FAS, TRAIL and TNF), which can activate caspase-8 and -10; and the apoptosome, regulated by cytochrome c and the Bcl-2 family, which activates caspase-9. Once this cascade is started, a positive feedback ensures the cell will inevitably undergo apoptosis: for example apoptosome-activated caspase-9 cleaves and activates caspase-3, this caspase-3 besides cleaving its target proteins, will also cleave more of caspase-9, which in turn will activate more of caspase-3. Some of the final targets of caspases include: nuclear lamins, ICAD/DFF45, poly(ADP)ribosepolymerase(PARP) and PAK2. The exact contribution that the cleavage of many caspase substrates makes to the biochemistry and morphology of apoptosis is unclear. However, the function of ICAD/DFF45 is to restrain the enzyme CAD (Caspase Activated DNase). The cleavage and inactivation of ICAD/DFF45 by a caspase allows CAD to enter the nucleus and fragment the DNA, causing the characteristic DNA ladder seen in apoptotic cells. 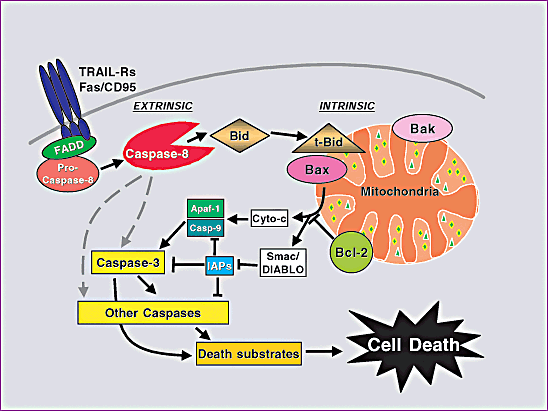